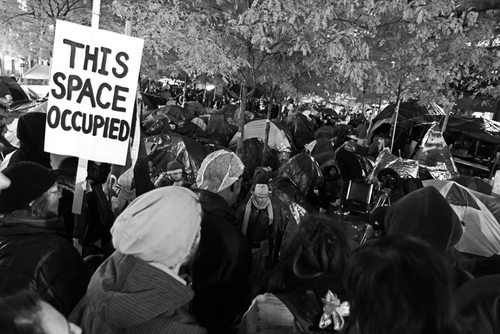 When it comes to possible police transgressions of the right to free speech, does it matter whether you thought the Occupy Wall Street (OWS) effort was part of a great social justice movement or a fruitless conglomeration of anti-establishment protesters? A team of researchers from the Global Justice Clinic at the New York University (NYU) School of Law and the Walter Leitner International Human Rights Clinic at the Leitner Center for International Law and Justice of Fordham Law School have released a study (download a PDF of the study here) on the police enforcement issues with the OWS protests in New York. Future reports are planned for Occupy developments in Boston, Charlotte, Oakland, and San Francisco.

After reviewing videos, interviewing Occupy participants, and reviewing news coverage, the researchers say that they found evidence of less than salutary methods of police action vis-à-vis the OWS participants in New York City, including:

They make no bones about concluding that the New York Police Department (NYPD) actions against the OWS protesters violated free speech and free assembly rights. As there has been no official review of abuse allegations in New York City by Mayor Michael Bloomberg’s administration, the report calls for independent reviews and for the mayor to appoint an independent inspector general to oversee policing practices.

Reportedly, of the five cities being examined by a consortium of law clinics around the nation, only the NYPD rejected invitations to meet with the researchers and to offer the police perspective. The lead author, NYU law professor Sarah Knuckey, told the Guardian that all five case studies “show the police are violating basic rights consistently, and the level of impunity is shocking.”

The report urges the use of “modern democratic policing styles that promote negotiation to facilitate protests, and enforcing strict controls on any use of police force,” best practices that Knuckey and her research colleagues state that some police departments occasionally practiced. Nonetheless, overall the police policies vis-à-vis the Occupy protesters seems to have crossed the line for Knuckey and her research team; the report’s finding of a lack of proper behavior on the part of the police and the lack of a review by Mayor Bloomberg leads them to call for federal investigations in instances where “city or state authorities themselves fail to take the necessary steps of review and reform.”

The Occupy Wall Street protests might evoke little sympathy from some New Yorkers, such as workers trying to get to and from their jobs, drivers negotiating traffic during Occupy protests and police actions, those who wanted to use Zuccotti Park for something other than a venue for protests, and taxpayers who might have had to pay for police overtime and for sanitation services in the park. But when does the nuisance factor of a protest group, even one like OWS with a tented encampment lasting months, become a justification for transgressions of First Amendment rights to freedom of speech and freedom of assembly?—Rick Cohen