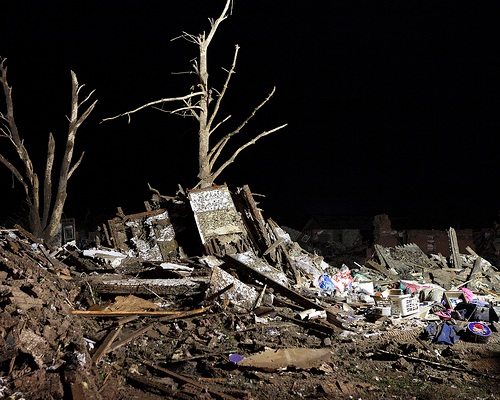 A new report from the Center for American Progress has found that no one in the government seems to know the cumulative federal cost of disaster relief. The Federal Emergency Management Agency didn’t know it, nor did the Office of Management and Budget. The study’s authors had to locate and piece together the total costs from various agencies and government sources; even so, they believe their estimate of at least $136 billion spent between 2011 and 2013 is conservative. What is clear, however, is that the rise of expenditures in this area has been startling. 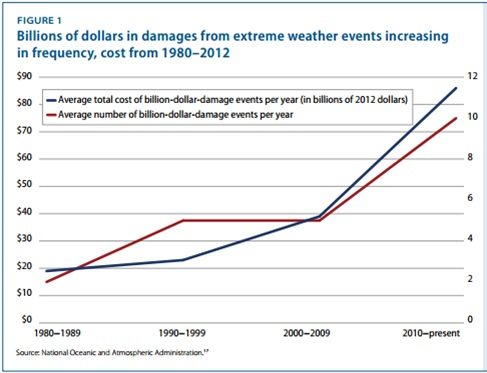 According to the report, there are a number of reasons for this steep increase. As population increases, more people now live in such high-risk places as coastal regions, floodplains, and fire-prone forests. Homes and infrastructure are now costlier…and then there’s climate change. The Center for American Progress points to a study released in January of this year, the National Climate Assessment draft report conducted by the federal multi-agency U.S. Global Change Research program:

“Human-induced climate change has already increased the frequency and intensity of some extremes. Over the last 50 years, much of the U.S. has seen an increase in prolonged stretches of excessively high temperatures, more heavy downpours, and in some regions more severe droughts.”

It goes on to say that

“Infrastructure across the U.S. is being adversely affected by phenomena associated with climate change, including sea level rise, storm surge, heavy downpours, and extreme heat.

Human-induced climate change is projected to continue and accelerate significantly if emissions of heat-trapping gases continue to increase. Heat-trapping gases already in the atmosphere have committed us to a hotter future with more climate-related impacts over the next few decades.

Many [climate-related changes] will be disruptive to society because our institutions and infrastructure have been designed for the relatively stable climate of the past, not the changing one of the present and future.

Planning and managing based on the climate of the last century means that tolerances of some infrastructure and species will be exceeded. For example, building codes and landscaping ordinances will likely need to be updated not only for energy efficiency, but also to conserve water supplies, protect against insects that spread disease, reduce susceptibility to heat stress, and improve protection against extreme events.”

The costs cited in this CAP’s report figure out to $400 per household per year. “If we don’t even know how much natural disasters are costing us, then Congress is going to keep under-budgeting for disaster relief and recovery,” according to Daniel J. Weiss and Jackie Weidman, co-authors of the study. “And lawmakers will end up doing deficit spending to pay for it”—typically through emergency “supplemental” bills that are passed apart from the regular budget process.

Regardless of the cause, extreme weather events now cost the United States more than $80 billion per year, on average. And the federal government has been picking up a greater share of that tab in recent years, with states and private insurers picking up much of the rest. (Often, however, the damage is simply paid for through lost economic activity—a 2010 study by the National Federation of Independent Businesses found that 30 percent of small businesses fail to reopen following a presidentially-declared disaster or emergency.)

Those costs could rise in the years ahead. Major weather disasters, defined as weather events that inflict at least $1 billion in damage (adjusted for inflation), have increased from an average of two per year in the 1980s to more than ten per year since 2010, according to the National Oceanic and Atmospheric Administration. The National Climate Assessment warned that a great deal of U.S. infrastructure is vulnerable to “phenomena associated with climate change, including sea level rise, storm surge, heavy downpours, and extreme heat.”

To prepare for that possibility, the CAP authors make a variety of recommendations. They suggest that the federal government should start keeping a precise tally of the costs of natural disasters. Congress should invest in “resilience” programs that allow communities to better withstand the damage from extreme weather, paid for by a small fee on fossil fuels. And the CAP report argues that the Obama administration should do more to reduce carbon-dioxide emissions and address climate change.

Otherwise, the report warns, “we are flying blind into a future with more costly disaster-relief and recovery spending.”—Ruth McCambridge