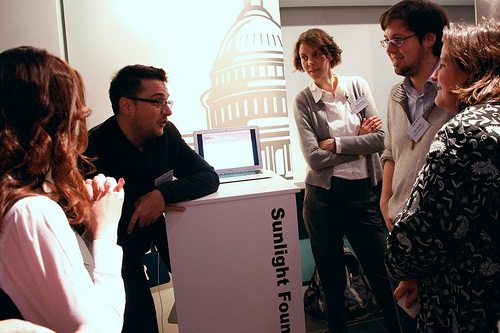 Sunlight Foundation Policy Director John Wonderlich has penned a powerful and, we think, persuasive critique of President Barack Obama’s generally weak position and weaker follow-through on campaign finance reform and federal government transparency. Wonderlich pulls no punches in citing President Obama’s unfulfilled promises. The president promised to put health reform negotiations on C-SPAN, and then he didn’t, opting instead “to negotiate a secret agreement with a segment of the industry the reform effort sought to regulate,” writes Wonderlich. Obama was supposedly reluctant in his embrace of super PACs and 501(c)(4) social welfare organizations, but Wonderlich seems to think that the president wasn’t quite so reluctant. He also notes the president’s move of selling “access to the inauguration, and to the presidency, to corporate donors” (Obama failed to limit donations to the inauguration or to post donation amounts online).

The latest blow to transparency is the post-inauguration creation of Organizing for Action (OFA), the new 501(c)(4) which will, according to Wonderlich’s synthesis of information from the Los Angeles Times and Democracy 21, “sell direct access to the President, for huge sums of cash, which will be disclosed online, quarterly, without specific dollar figures.” Wonderlich is unimpressed with such a disclosure method. He writes, “Quarterly disclosure in ranges is the kind of disclosure you create when you don’t want to be seen.” His scathing conclusion is that OFA is:

“a policy innovation [that] Obama [should be] remembered for – a return to soft money and unlimited donations outside the confines of campaign finance law, with instant access to the White House for the most well-heeled donors, all, incredibly, in the name of empowering the grassroots. It’s more egregious, direct, (and potentially corrupting) than the similar efforts of recent Presidents who came before him, an evolutionary step forward for money in politics that is more legal, more normalized, and more powerful than it was before.”

Wonderlich questions whether Obama’s rhetoric was “fake” when he spoke about stopping the stream of unlimited secret money in politics that the Supreme Court’s Citizens United decision helped unleash. NPQ noted that that the president failed to mention campaign finance reform in either his State of the Union address or his inauguration speech. Where is the nonprofit sector on campaign finance? Where is the widespread call for limits on the flow of money into elections and the disclosure of sources and amounts? Is the nonprofit sector concerned only when the big money seemed to be donors like the Koch brothers and mechanisms like Karl Rove’s Crossroads GPS? Isn’t the problem of unrestrained, secret money in elections ultimately corrupting no matter who wins the elections in question? —Rick Cohen