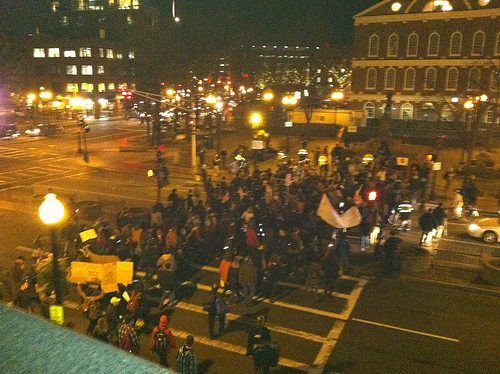 Every now and then, the NPQ Newswire takes a look at some of the reverberations from the Occupy movement, which seems to have largely faded from vision with the police evictions of most of Occupy’s various encampments around the nation. For all of Occupy’s sturm und drang during its heyday, is there anything left from the movement?

The publisher of one of the dozen or so books that emanated from Occupy encampments (This Changes Everything), Yes! magazine continues to be a regular source of opinion and insights about what things Occupy might have actually changed. The web editor of Yes!, James Trimarco, has been a regular writer about the Occupy movement and offers five lessons or insights—five “good ideas”—that he gathered from the Occupy national gathering in Philadelphia (#natgat), which NPQ looked at recently (see here and here). Hear are Trimarco’s findings:

Because the National Gathering involved Occupiers from many parts of the country, it may be too much to have expected that the good ideas would coalesce around a substantive agenda or platform. Does the #Natgat focus (both in our previous NPQ Newswires on #Natgat and in this report from Yes!) on tactics rather than the bigger, substantive policy issues indicate that a cohesive policy platform for the post-encampment Occupy movement is not likely to happen?—Rick Cohen