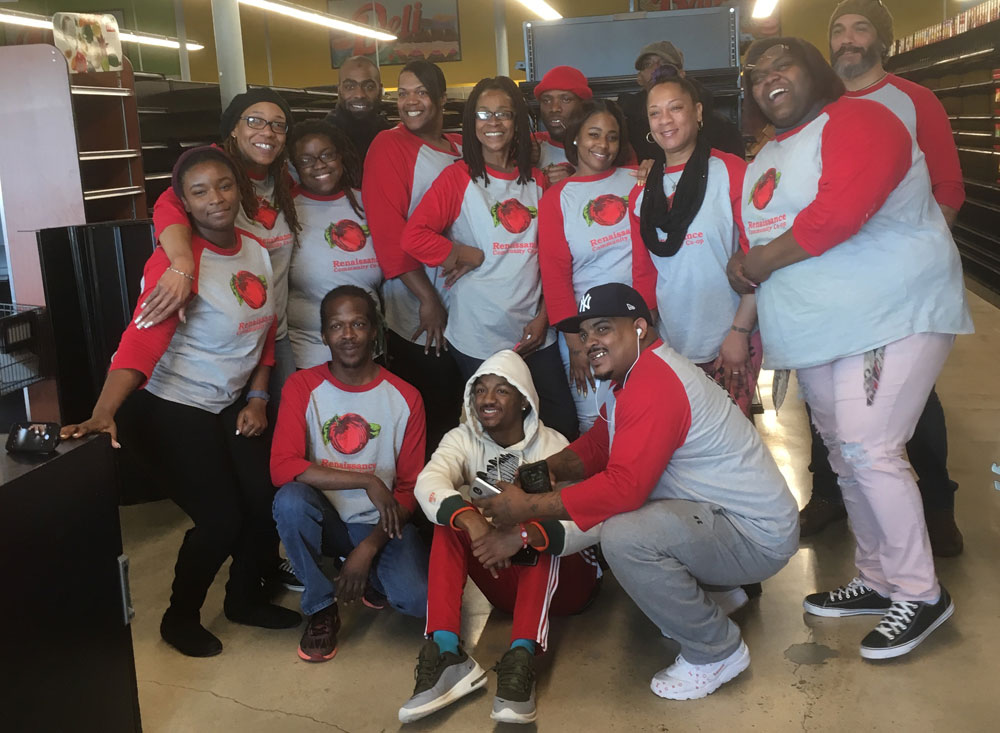 At 2 pm Eastern today, please join us for a special “Remaking the Economy” webinar cosponsored with the Fund for Democratic Communities (F4DC), based on this paper. The webinar is titled Anatomy of a Failed Co-op: Lessons from Greensboro’s Renaissance Community Cooperative and will provide a chance to hear directly about lessons learned in the co-op organizing effort. On this webinar, you’ll hear from Sohnie Black and Ed Whitfield of F4DC and Roodline Volcy, former co-op board chair. Register for free here.

This is the story of a failure: the failure of the Renaissance Community Cooperative, or RCC. A pretty important failure, in our opinion. A failure for which we bear some responsibility.

Why, you may wonder, should we write about failure, especially this particular failure? Here’s why: For more than seven years, RCC was a huge focus for our organization, the Fund for Democratic Communities (F4DC). We staked a lot of our legacy on it. And it didn’t work. We need to know what went wrong in order to salvage something from the experience.

But why should anyone else care?

Because we—our organization, and many of the readers of this essay—are connected in a web of justice-seeking movements that aim to build a new, racially equitable, and cooperative solidarity economy that must come alive if we are to achieve a just transition.

We’re doing this work in a time of increasing crisis that requires a system-shifting response. That kind of transformative work is certain to have failures. A lot of failures. We have to learn from our failures, and recover quickly from failures, or we’ll never succeed. So, we are going to use a notable specific failure, the failure of RCC, to model the first steps in productively using failure.

In writing this article, we see ourselves as accountable, in the sense of we are giving an account of what happened, to the movements in which we work. We learned a lot about the grocery business as we worked on the RCC project. In other forums we can list out all that we learned and all that we got right. In this essay, however, we intend to focus on what we got wrong, so our movements better understand the terrain ahead.

To begin, let us explain a bit about who we are and how we came to know this version of “The Story of the RCC.” There were over 1,300 owners of the RCC, and we cannot presume to speak for all of them. This is our story, our account, yet you’ll see in the account that follows how we often use the pronoun “we” in speaking of RCC; for good or for ill, this is how embedded we came to be in the project, and it is from this embedded perspective that we tell this story.

Birth of a Dream

In January 1999, two of the authors of this article (Ed and Marnie) independently showed up at a community meeting called by a newly emerging group—Concerned Citizens of Northeast Greensboro—invited there by friends who lived in Northeast Greensboro. This Black and mostly working-class part of our city had just lost its only full-service grocery store a month before, when Winn-Dixie announced it would close its store on Phillips Avenue.

Recognizing the significance of the loss, residents immediately responded with calls to Winn-Dixie corporate headquarters, had a picket line at the store, and created Concerned Citizens. They worried that Winn-Dixie’s departure was a harbinger of a broader decline of the shopping center, which would in turn lead to further disinvestment in their community. More than 100 people packed into a church sanctuary, where they struggled to come up with solutions.

Eight years later, Ed and Marnie cofounded a small private operating foundation, F4DC, with a focus on economic democracy. By 2011, we noted there was still no full-service grocery store in northeast Greensboro. As predicted, the community was falling behind the rest of the city economically.

In the intervening years, Concerned Citizens had had to switch its focus to fight off the reopening of a landfill in the heart of the neighborhood. After years of organizing (including the development of a second organization with a citywide base—Citizens for Economic and Environmental Justice, or CEEJ), they had built a grassroots political powerhouse that overturned the vote to open the landfill and ultimately turned over the city council. On the night of that re-vote victory, F4DC approached the chair of CEEJ and proposed that it was time to get back to work on a grocery store for the neighborhood, one that the community itself would own, and we were willing to help.

This is the beginning of our connection to what became the Renaissance Community Cooperative, or RCC. F4DC played the role of chief technical assistance agent (and eventually, chief funder) to a community-led effort to build and operate its own cooperatively owned grocery store. It took five years to open the store, and by the time it opened in 2016, it had developed something of a national following.

Around the country, communities with similar problems were looking to the RCC to see if they might use a similar model to bring fresh food, good jobs, and economic development to their neighborhoods. In the US, food co-ops, at least since the 1970s, had mostly been used in affluent areas to build comparatively high-priced organic food stores. The RCC, in contrast, was designed as a more or less “conventional” grocery store that would sell the range of products one could find in a Kroger or Food Lion at what we hoped would be affordable prices.

RCC opened in October 2016. For over two years, it struggled, never coming close to its revenue targets. While F4DC had committed financial support to cover some startup costs, we had never intended to bankroll an operating business. We’d helped RCC to amass what we (and RCC’s lenders) thought was a sufficient capital reserve through loans and equity investments to ride out two-plus years of projected initial losses. But RCC’s sales were less than a third of what they needed to be. Despite being the only full-service grocery store in a service area of 35,000 people, RCC simply couldn’t attract enough customers.

Once RCC burned through its initial capital reserves, F4DC began making cash infusions through the purchase of non-voting stock, because the store’s mission was our mission: it was a key part of building an economy that was by and for the people in the community. We ultimately invested more than $1.5 million and considerable staff time in the hope of giving the store enough runway to build its customer base.

But it didn’t work. In January 2019, RCC closed its doors, a massive loss to 1,300 member-owners, the dozens of employees who lost their jobs, and the community that once again has no nearby grocery store. And, there being no better way to say this, it was a massive failure.

We use that word “failure” baldly, because here in late 2019, there are only a few tangibles left to show for all the labor and resources that went into RCC.