The Consequences of Rejecting “Obamacare” 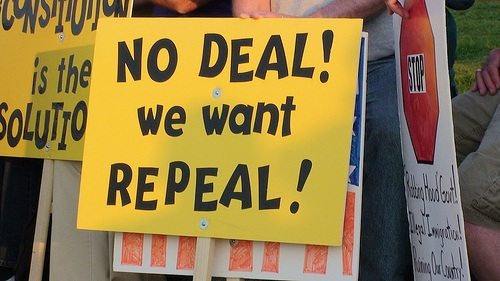 A study by the Rand Corporation says that the 14 states that have so far chosen not to expand Medicaid under the Affordable Care Act “will leave a total of $8.4 billion on the table and 3.6 million fewer people insured.” As of this moment, the no-expansion states are Alabama, Georgia, Idaho, Iowa, Louisiana, Maine, Mississippi, North Carolina, Oklahoma, Pennsylvania, South Carolina, South Dakota, Texas, and Wisconsin.

These states think that they are avoiding increased expenditures, but the reality according to Rand is that they will be hit in 2016 with $1 billion more in expenditures for uncompensated healthcare. The Rand study concludes that expanded Medicaid is a wiser option for states than the do-nothing alternative because, as the study’s lead author, Carter Price, notes, “states will still be subject to the taxes, fees and other revenue provisions of the Affordable Care Act, without reaping the benefits of the additional federal spending which will cost these states economically.”

Expanded Medicaid gives Medicaid coverage to individuals with incomes up to 138 percent of the federal poverty level. By rejecting the expansion, these states are rejecting a program in which the federal government covers 100 percent of healthcare expenditures in 2014, 2015, and 2016, gradually reduced to 90 percent by 2020. Those people or households at 138 percent of the poverty level aren’t raking in the dollars by anyone’s estimation.

Note: Poverty level is for 48 contiguous states and the District of Columbia

Opponents of expanded Medicaid say that poor people who aren’t currently eligible for Medicaid could simply purchase affordable healthcare coverage on the state exchanges. Using the Kaiser Family Foundation’s subsidy calculator, we generated the following subsidy levels that would be available to households with incomes at 138 percent of the federal poverty level:

What doesn’t get calculated in the purchase of private insurance on the exchange are the generally higher co-pays under private plans as compared with Medicaid. Based on simple out-of-pocket costs for lower-income people, Medicaid is much preferable to private insurance, even when subsidized.

Without guidance from federal or state health insurance “navigators” or “assisters,” lower-income people struggle to figure out what they might qualify for under the ACA. According to a recent survey conducted by Princeton Survey Research Associates for InsuranceQuotes.com, 64 percent of survey respondents without insurance coverage reported being unsure if they will buy insurance before January, 61 percent that they have not bought insurance before because of the cost, and 58 percent unsure if they would qualify for subsidized coverage under the Affordable Care Act. The highest level of ACA subsidies to purchase insurance on the exchanges go to households with incomes of less than $30,000, but 68 percent of respondents in that income group reported that they were not aware they qualified for coverage.

We all know where to find the 3.6 million left uninsured after the states spurn them for expanded Medicaid: sitting in nonprofit hospital emergency rooms, searching for free healthcare clinic days, paying for health treatments from scarce household resources that would have gone to other family needs, or simply doing without. That’s healthcare coverage that 14 states will have no reason to be proud of.—Rick Cohen