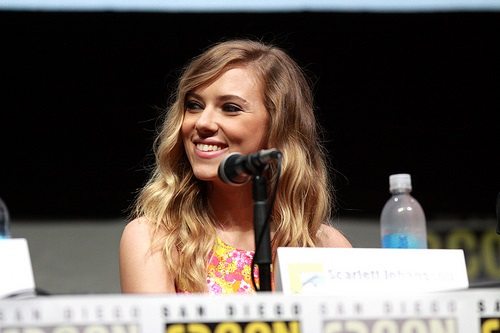 Imagine you’re Scarlett Johansson, a talented movie star. You reportedly earned a record $20 million for your appearance in the upcoming Avengers 2, topping the previous single-film high payment for an actress ($19 million for Angelina Jolie in The Tourist). A website that monitors and reports on celebrity wealth estimated your 2012 net worth at $60 million, not just from films, but also endorsement deals with L’Oreal ($3m a year), Calvin Klein ($1m a year), Reebok, Dolce & Gabbana, and Louis Vuitton. In fact, a lot of your income has been from endorsement deals—including a deal with SodaStream, the home carbonated soda maker with a factory in an Israeli settlement on the occupied West Bank. Your SodaStream commercial, to be aired during the Super Bowl, is already in the can and is considered vital to the Israeli soda-making firm, whose business performance in the U.S. has been lackluster.

At the same time, since the mid-2000s, you’ve been a global ambassador for Oxfam, the international humanitarian relief organization. Over the years, you’ve visited such countries as Kenya, India, and Sri Lanka on behalf of Oxfam, even skipping the Oscars one year to do an Oxfam visit, and you’ve said many positive things about the NGO, though your statements on its website are no longer there. But Oxfam isn’t a fan of SodaStream. In fact, like much of the world, it views Israeli settlements on the West Bank—in this case, the settlement Ma’ale Adumim, which was taken by Israel during the 1967 war—as illegal, and has joined with other organizations to protest business investment in Israeli firms on the West Bank. Oxfam has made it clear that it is none too happy with its global ambassador suddenly showing up as an ambassador for home soda machines manufactured in the occupied West Bank.

Yesterday, Scarlett Johansson announced she was cutting her ties with Oxfam. Her public statement cited “a fundamental difference of opinion [with Oxfam] in regards to the boycott, divestment and sanctions movement.” In accepting Johansson’s resignation, Oxfam reiterated its opposition to “all trade from Israeli settlements, which are illegal under international law,” which Oxfam believes “further the ongoing poverty and denial of rights of the Palestinian communities.”

Worth noting, and generally unreported in the Johansson/SodaStream/Oxfam controversy, is Oxfam’s longstanding aid role in Palestine. Oxfam isn’t simply an NGO that signed on to the Boycott, Divestment, and Sanctions (BDS) movement or campaign. It has run programs in both Israel and what it calls the Occupied Palestinian Territory, or OPT, since the 1950s, with an OPT focus “on helping improve the lives of poor Palestinians living in areas physically isolated by policies and practices of the occupation…includ[ing] Gaza, East Jerusalem, and Area C of the West Bank, where the government of Israel maintains full military and civil control, along with Palestinian villages that are enclosed by Israeli settlements, access restrictions, or the Wall.” Among its OPT initiatives are efforts to improve access to clean water and sanitation in Gaza, help small farmers in the West Bank form producer cooperatives (including olive-growing cooperatives), invest in economic development projects, and strengthen civil society organizations.

On balance, it’s likely that Oxfam is doing more to meet the critical needs of poor Palestinians around issues of community development, infrastructure, agriculture, and economic development than SodaStream is. Johansson got plenty of benefit from working with Oxfam over the years. Her Oxfam-sponsored visits to developing countries vaulted her into the celebrity humanitarian category that Angelina Jolie occupies due to her extensive humanitarian aid resume, an intangible but desirable factor for celebrity reputations. With more than eight years experience with Oxfam, including serving as an official Oxfam ambassador since 2007, Johansson has made a new calculation and traded Oxfam for SodaStream, with whom her relationship has only formally existed since earlier this month.

Let’s take Johansson at her word that she believes that the employment generated by SodaStream at its West Bank factory is a net benefit for Palestinians. After several years of work with Oxfam, an NGO that actually does humanitarian work on the ground addressing poverty in Palestinian communities rather than just talking about Palestinian issues from afar, Johansson has sided against the NGO and in favor of her work with one business entity—and the contract it gave her for her Super Bowl ad and other global ambassador functions. Whatever Johansson’s beliefs, there is almost no way that her rejection of Oxfam in favor of her endorsement deal with SodaStream won’t go down badly.—Rick Cohen

Editor’s note: It should be stated that Oxfam’s opposition to trade with companies working in Israel’s settlements in the West Bank is due to Oxfam’s position, expressed above in its statement about Johansson, that it views those settlements as illegal under international law and an infringement on the rights of the Palestinians with whom Oxfam works with on issues of poverty, economic development, health, and sanitation. To our knowledge, Oxfam has not signed on to the Boycott, Divestment, and Sanctions movement, and the BDS movement is not the basis of Oxfam’s opposition to trade with the companies operating in the occupied West Bank settlements.