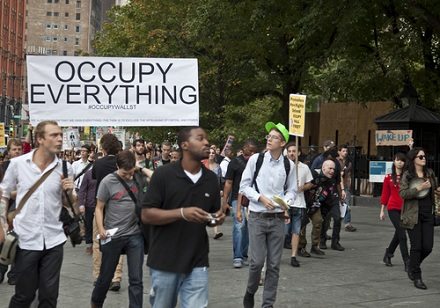 #Occupy: Given the increasing use of social media by nonprofits, a new ruling by New York City Judge Matthew Sciarrino, Jr. is worth noting. Occupy Wall Street activist Malcolm Harris was arrested on October 1, 2011 on the Brooklyn Bridge. Prosecutors have been attempting to subpoena the tweets Harris sent out in the weeks before and after his arrest.

#Privacy: Harris was among 700 protesters arrested on the bridge that day. He contends that he thought that the police had permitted the protest. Prosecutors are looking for his tweets, presumably in hopes of finding evidence that might show that he and his Occupy colleagues knew that their march was illegal. Harris and his lawyers resisted the request as a broad invasion of his privacy and his right to free association, but prosecutors contended that tweets are meant to be seen by the world and do not qualify for that protection: “All of the tweets that we request are communications that the defendant put out there, into the world, and he has no privacy interest. The very purpose of Twitter is to spread this information to the entire world.”

#Denied: Judge Sciarrino issued an opinion stating that Harris’s arguments for privacy would not win, and apparently decided to play around with some hashtags of his own (much as we have done in this newswire) in the ruling itself: “The defendant moved to #quash that subpoena. That motion is #denied.” Tweets, he ruled, are for the broad public, not just for the people who follow a Twitter user. In fact, Judge Sciarrino ruled that the prosecutors could obtain information about the Twitter users who were intended to be recipients of Harris’s communications as well.

#Fishing: The judge compared tweets to bank records, observing that “an analogy may be drawn to the bank record cases where courts have consistently held that an individual has no right to challenge a subpoena issued against the third-party bank.” Although he said that there were “reasonable grounds to believe the information sought was relevant and material to this investigation,” the prosecutors’ contention is so broad as to encourage Twitter fishing expeditions for subpoenas of tweets to see whom they went to and who might have been in the issuer’s network.

#FreeSpeech: Is this of importance to nonprofits? Like other forms of social media communications, nonprofits increasingly use Twitter, Tumblr, Facebook, Pinterest and more to communicate—sometimes with “the entire world,” but sometimes with a more select group of associates within a particular network. Does Judge Sciarrino’s decision sound justified to you? Or is it an invasion of individual—and potentially organizational—privacy and free speech rights? –Rick Cohen