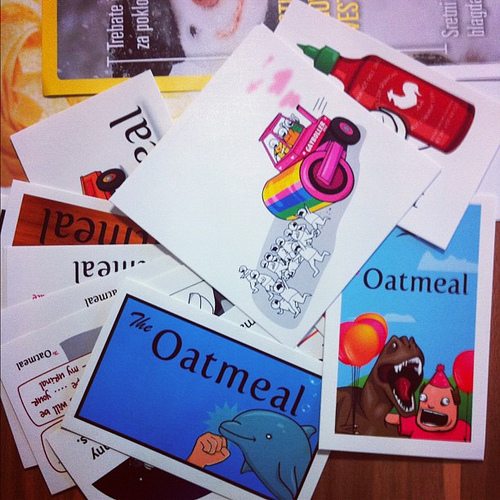 This story—a fundraising artifact of our times to say the very least—contains a few twists and turns but I will try to keep it simple. A cartoonist named Matthew “the Oatmeal” Inman has been plagued by the use and monetization of his cartoons online by a website called FunnyJunk. Approximately one year ago, he wrote a blog post saying that FunnyJunk had “practically stolen [his] entire website.” The owner of the website responded with a post that claimed the Oatmeal was trying to sue him but there was still apparently a bunch of the Oatmeal’s content on FunnyJunk but without no attribution to The Oatmeal. The Oatmeal said he just did not want to bother with forcing him to take it down so he let it ride, but then, a week ago, apparently FunnyJunk served him with papers, threatening to sue him for $20,000.

The Oatmeal does not wish to fight this out in court so after he consulted his lawyer he posted FunnyJunk’s letter and his own response online, writing, “I’ve got a better idea. I’m going to try and raise $20,000 in donations. I’m going to take a photo of the raised money. I’m going to mail you that photo, along with this drawing of your mom seducing a Kodiak bear. I’m going to take the money and donate one half to the National Wildlife Federation and the other half to the American Cancer Society.”

Here are a few examples of the Oatmeal’s work: “Cat vs. Internet” and “How to Pet a Kitty.” –Ruth McCambridge