The Other Stand-Your-Ground Case: The Killing of Jordan Davis 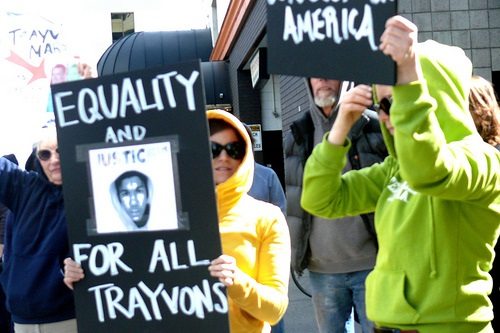 The killing of Trayvon Martin, and the subsequent acquittal of the killer, neighborhood watch volunteer George Zimmerman, is not the only “stand your ground” case in Florida with major racial implications. (Yes, we know that the Zimmerman defense did not explicitly use “stand your ground” as a defense, but it was referenced in witness testimony and served as a backdrop for the entire trial.) Last fall, a white man, Michael David Dunn, opened fire on black teenager Jordan Davis. The teen was sitting in the back seat of an SUV, which Dunn felt was playing music too loudly. Dunn initiated an altercation with the kids in the car and then shot Davis at point-blank range.

Dunn’s defense is stand-your-ground; he claims to have felt threatened and says he saw the barrel of a shotgun aimed at him by the kids in the SUV, though no weapon was ever recovered. Trayvon Martin, readers will recall, was on his way to his parents after buying iced tea and Skittles. Davis and his companions had stopped to buy gum. Dunn was on his way back from a wedding, where he had reportedly had several slugs of Jack Daniels. He need not claim that he was actually threatened, only that he believed he was threatened—that’s all it takes to trigger the stand-your-ground defense.

Will the trial of Dunn for Davis’s killing get the attention that Zimmerman’s trial did? Cristina Maza, writing for PolicyMic, is not so sure. She suggests that Davis was killed for playing music too loud for the taste of a potentially drunken white guy, which she calls an injustice, an outrage, and a “travesty,” but Martin was killed because “his mere presence and physical appearance aroused suspicion in a self-appointed vigilante.” Martin, she writes, “was killed for merely existing.”

That may explain the disparate press attention toward the Martin and David killings, but it shouldn’t dissuade nonprofits from linking the two as emblematic of this nation’s persistent racial inequities, as evinced in statistics about arrests, incarcerations, and shooting deaths, and the policies of too many states that weaponize and unleash people like Zimmerman and Dunn. At the New Orleans rally about the Sanford, Florida trial verdict organized by Rev. Al Sharpton’s National Action Network and the NAACP, marcher Jebarr Locure held a sign that read, “I stand here today…so my sons won’t be the next Trayvon Martin or Jordan Davis of tomorrow…And with hope I will not join the fraternity no father wants to join.” In Tallahassee, marchers under the banner of the Dream Defenders from Florida Agricultural and Mechanical University (FAMU) linked the Martin and Davis killings in their call for Governor Rick Scott to convene a special session of the Florida legislature to address the state’s stand-your-ground law and the issue of racial profiling.

Whatever the differences in the backgrounds and motivations of Zimmerman and Dunn, nothing can disguise the fact that they both shot unarmed teenage black kids who were in some manner profiled by their assailants as “threatening” (though in Dunn’s case, his defense smells like an artificial, post-hoc rationalization of pure malice). They could do so because the law favors the two shooters, arming them with both concealed weapons and legal excuses. Whatever the differences in the behaviors of Martin and Davis, they were both young black men whose deaths added to racially disparate statistics of gun-related deaths. Both cases fit President Obama’s call for reconsideration of overly broad state self-defense statutes and for a broader consideration of problems of race in this nation.—Rick Cohen