The Panama Papers, Philanthro-Capitalism and the Arts 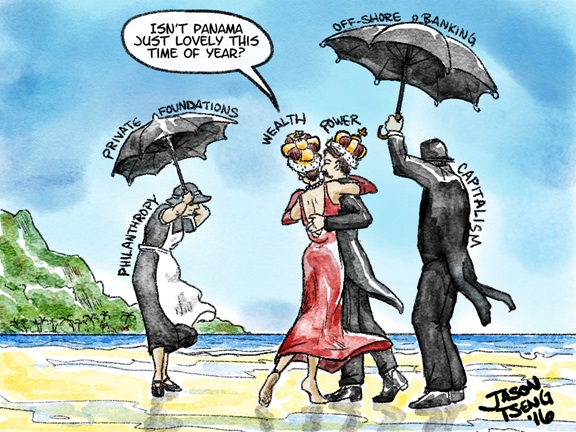 This article was originally published by The Clyde Fitch Report and is reprinted with permission. The opinions and positions presented here are the author’s own and do not represent the opinions or positions of any organization the author is affiliated with.

The world was rocked by the recent release of The Panama Papers, the largest leak of confidential documents in the history of investigative journalism. The millions of leaked documents from the firm of Mossack Fonseca reveal a complex shadow economy on a global scale, enabling everything from money laundering and criminal activity to government corruption and tax evasion. The Panama Papers have already toppled governments, exposed corrupt officials, and may even impact the U.S. Presidential election, and we’re just getting started. The International Consortium of Investigative Journalists (ICIJ), the collective managing this trove of data, says that many more names, particularly American ones, will be released in forthcoming waves of stories.

But for all the righteous anger being directed at “the 1%,” it’s important to recognize that the dark underbelly of the offshore banking industry exposed by this leak is simply the nefarious twin of philanthro-capitalism, which we have enshrined as the shining paragon of American generosity.

Both systems allow the wealthy and the corporate entities they own to divest vast sums of money into tax shelters, siphoning billions of dollars out of an already resource-strapped public sector. These funds can be then used to further the interests and the agendas of their owners or trustees. When stored in an offshore shell company, the funds may be used to influence leaders of foreign governments for personal profit; or, when donated to a private foundation controlled by the donors, they may be used to unilaterally dictate health policy for developing countries. Our own government’s ability to provide robust public oversight of this wealth is severely impaired. And never mind the millions of dollars now pouring into murky, opaque campaign finance spending in the wake of Citizens United.

Many people in the arts admin world know me for an editorial comic/op-ed that I published last year criticizing the flawed and racist conclusions of Michael Kaiser’s DeVos Institute study which, among many things, suggested that funders should consider funding fewer Black and Latino arts groups—and let “sick” organizations die off. The DeVos study also recommended that Black and Latino organizations should behave and structure themselves more like white institutions in order to attract more wealthy (read: white) individual donors.

I contended that the DeVos study ignored the impact of structural oppression, like racism and classism, which prevents Black and Latino organizations (and the communities they serve) from achieving financial stability. I was relieved that the DeVos Institute rightly received pushback from groups like Grantmakers in the Arts, which has been making concerted strides towards racial equity in arts funding, and the National Center for Arts Research, which published a study to counter the implications of the DeVos study.

As wrongheaded as the DeVos study was, I was not surprised that an organization bearing the name of one of the founding families of the neo-conservative movement would come to such profoundly narrow-minded conclusions. In fact, the Institute’s primary organizing principle, The Cycle, reveres institutionalism, growth-for-growth’s-sake, and the imperative of the wealthy individual donor—which is essentially well-dressed Reaganomics for the arts sector: Cater to the needs of the wealthy and they will, in turn, share their wealth with the less-thans.

For those of you who don’t know much about the DeVos family, here’s a quick recap: The Michigan-based DeVos family made their fortune from the multibillion-dollar Amway Corporation, which Richard M. DeVos, Sr., founded back in 1959. Amway has been criticized for running a “legal pyramid scheme” and conning thousands of Americans out of billions of dollars every year through an ethically dubious, multi-level marketing system.

The DeVos Family is widely known as kingmakers in conservative politics:

The DeVoses sit alongside the Kochs, the Bradleys, and the Coorses as founding families of the modern conservative movement. Since 1970, DeVos family members have invested at least $200 million in a host of right-wing causes—think tanks, media outlets, political committees, evangelical outfits, and a string of advocacy groups. They have helped fund nearly every prominent Republican running for national office and underwritten a laundry list of conservative campaigns on issues ranging from charter schools and vouchers to anti-gay-marriage and anti-tax ballot measures. “There’s not a Republican president or presidential candidate in the last 50 years who hasn’t known the DeVoses,” says Saul Anuzis, a former chairman of the Michigan Republican Party.

One notable recipient of DeVos generosity is Michigan Governor Rick Snyder, whose administration passed a number of DeVos-backed laws, such as an anti-union “right-to-work” law, and, most recently, the controversial “emergency manager” law, which stripped local governments of democratic rule in favor of state-controlled “emergency managers.” This law resulted in the disastrous Flint water crisis, which exposed tens of thousands of Flint residents, a majority of whom are African-American, Latino/a, Asian, Arab, or Native American, to poisonous, lead-tainted water.

While it would be unfair to condemn the DeVos Institute merely for its association with the DeVoses, I believe that it is a fair to say, by evidence of their actions and publicly stated methodologies, that the Institute’s philosophy is aligned with the ideology of the DeVos family. Do I think that Betsy DeVos—wife of Dick DeVos, son of Richard—called up Michael Kaiser in the middle of the night to collude with him to publish a study that would result in the divestment of Black and Latino organizations? Of course not. But I am not naïve enough to believe that the two issues are completely disentangled.

Michael Kaiser owes much of his success and influence in the arts world to his close friendship to rich conservatives like Betsy and Dick DeVos. He has parlayed such relationships into multi-million-dollar grants during his stints as the “turnaround king” at the Royal Opera House, American Ballet Theatre, and now at the institute that he chairs, courtesy of a $22.5M gift from you-know-who. While Kaiser and the Institute may not be pawns of the Amway aristocracy, their existence is predicated on the continued survival and solvency of their benefactors.

In addition, other arts funders, such as Bloomberg Philanthropies (another philanthropic instrument accountable to a billionaire with an agenda) have cemented the DeVos school of thought into the next generation of arts administrators by making DeVos Institute training compulsory for its 262 grantees.

If accepting money from a controversial funder is not a political act, then turning a blind eye to their agendas and relationships certainly is. Some will argue that the wealthy elite can’t possibly be quite so nefarious in their giving. But given how well coordinated their political donations and offshore shell companies are at pushing their agendas, it strains credulity to believe that they would be so cavalier in their philanthropy.

Others will make a “better the devil you know” argument—that there are much worse actors out there and that we can at least do some good with the funds they provide. But if, as artists and administrators, we are committed to a world free of oppression, where creativity is unbound by the circumstances of your birth, then we must be prepared to enter a world in which we are not made subservient to our very oppressors by virtue of their unexamined finances. Thanks to the Panama Papers, those very finances are about to enter the light.

Jason Tseng has devoted his professional and personal life to empowering ordinary people to make extraordinary change. Splitting his time between serving the arts and queer communities of color, he has worked for organizations like Theatre Communications Group, Gay Lesbian Alliance Against Defamation (GLAAD), and currently serves on the steering committee and chair emeritus of GAPIMNY, the second oldest queer Asian community organization in the nation. Jason currently serves as the Community Engagement Specialist at Fractured Atlas, a nonprofit technology company that serves artists. Fractured Atlas helps artists raise money, manage risk, find space, sell tickets, track fans, and advocate as a field. With over 50,000 members nationwide in every artistic discipline and over $75 million raised for arts projects across the nation, Fractured Atlas is the largest member-based arts organization of its kind. Before moving to New York, he grew up outside Washington, D.C., in Maryland and graduated from the University of Richmond studying Women, Gender, & Sexuality Studies and Theatre. In his spare time, Jason creates plays, stories, comics, and illustrations (usually about queer people and people of color). He now lives in Long Island City with his fiancé and their rabbit, Turnip Cake.