The Power of Bert and Ernie’s New Yorker Cover

NPQ has talked before about the incredible usefulness of well-placed political art with a sense of humor. We loved it when Mitt Romney’s “binder’s full of women” comment elicited—overnight—a wave of political cartoons from all and sundry. The fact that they were FUNNY helped us make the point and enjoy the moment. Now, here comes the July 8/15 issue of the New Yorker with a cover featuring Bert and Ernie watching TV coverage of the Supreme Court decisions on DOMA and Prop 8. OMG! It is very cute!

The cartoon is entitled “Moment of Joy,” and it was apparently submitted unsolicited to Tumblr by artist Jack Hunter and then picked up by the New Yorker. 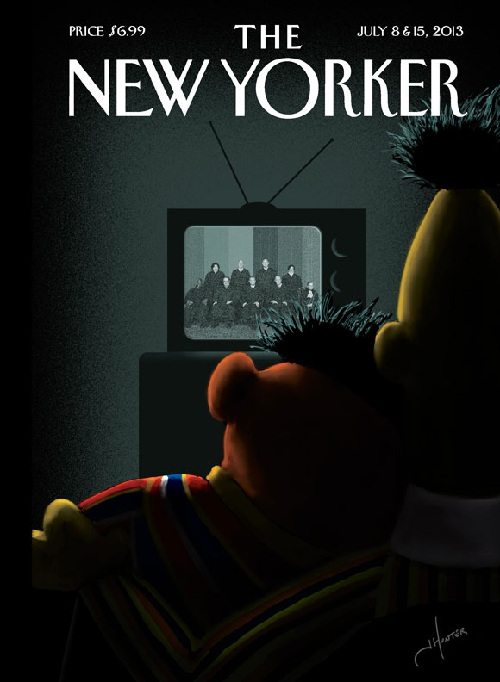 Sesame Workshop, the producers of Sesame Street, insist the duo’s relationship is platonic. In an earlier statement on their Facebook page, they asserted that “Bert and Ernie are best friends. They were created to teach preschoolers that people can be good friends with those who are very different from themselves. Even though they are identified as male characters and possess many human traits and characteristics (as most Sesame Street Muppets do), they remain puppets, and do not have a sexual orientation.”

Apparently, some are offended by the image, while others have signed a petition entreating Bert and Ernie to get married.—Ruth McCambridge