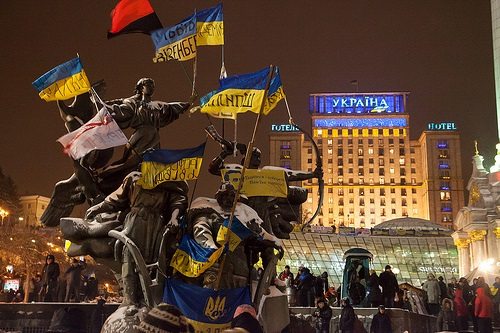 NPQ thinks that some of the newer forms of journalism are providing unanticipated depth to reporting on world events. For instance, a blog at the Washington Post dubbed “The Monkey Cage” has surveyed participants in the recent Ukrainian “Euromaiden” protests. This is a part of the blog’s attempt to publish political science research for popular consumption. And in this vein, political scientist Olga Onuch surveyed participants at the protest sites at Kiev to determine who was protesting and what the role of social media and Internet news was. The surveys were conducted by 20 interviewers; at the point that this blog post was written, 1203 had been done.

“The preliminary findings from [the] study are surprising and incongruent with reports from news media outlets:

She then turns her attention to the ways in which people found out about the protest they were attending, and she provides the following chart. 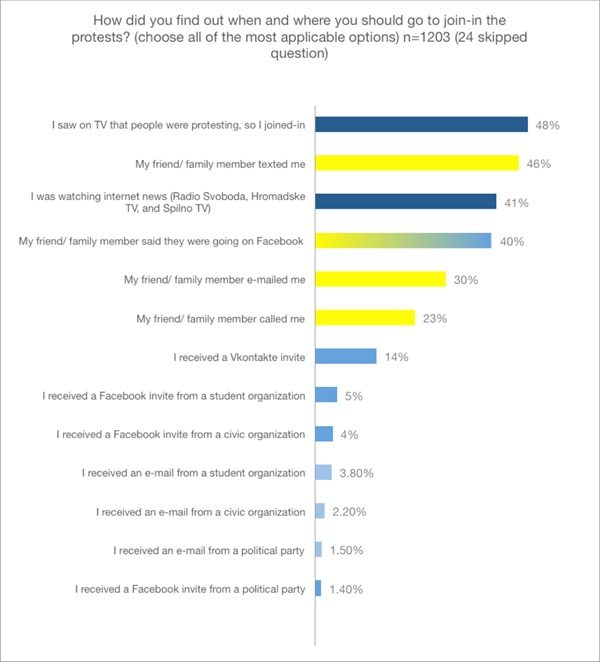 Finally, Onuch writes that “first impressions point to an ‘Internet-to-the-streets’ directionality of claims and framing of demands. In interviews protesters admitted to seeing signs and statements on Facebook, which inspired their own version (such as the famous UKRAINEUKRAINE sign). Thus, activists, journalists and politicians should note that these new technologies…social media, and Internet sites seem to be crucial in providing new information about, as well as the language of, protest, which protest participants can employ and make their own once they join their friends and family members in the streets.”

Dr. Onuch is a Shklar Research Fellow (2013-2014) at the Harvard Ukrainian Research Institute at Harvard University in Cambridge, Massachusetts. Her research focus is on the comparative study of protest politics, political behaviour, and institutions in democratizing states in Latin American and Eastern Europe.—Ruth McCambridge