The Role of Philanthropy and Advocacy in Healthcare Reform Implementation 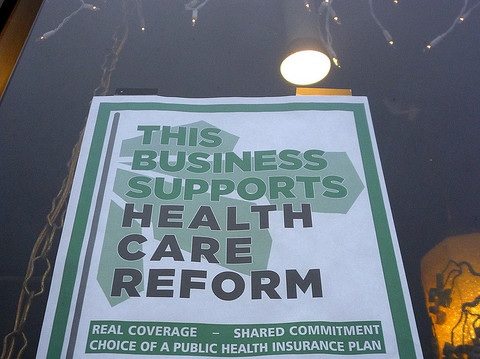 Editor’s Note: This article quotes unnamed sources, which is contrary to NPQ’s standard editorial practice, however the Cohen Report was granted access to this conference only on the condition that any quotations used would not be attributed to specific speakers.

As the saying goes, it’s all over but the shouting. That fits national health care reform, right? Not at all. Philanthropy New York, New York University’s Robert F. Wagner Graduate School of Public Service, and Duke University’s Center for Strategic Philanthropy and Civil Society recently held a “Money and Power in Post-Election America” conference in New York City (tellingly subtitled “Where Is Philanthropy?”). One conference panel explored foundations’ political advocacy roles in the implementation of the Affordable Care Act. That exploration underscored challenges that should motivate nonprofits of every type. It should also spark questions about how institutional philanthropy envisions itself empowering the nonprofit sector to take a role in shaping the implementation of the new and as of yet untested healthcare reform law.

In the lead-up to the health reform legislation, the mobilization of nonprofit advocates was essential to pushing the Patient Protection and Affordable Care Act (ACA) across the finish line, as one workshop participant put it. The most prominent of the explicitly activist efforts to promote national health insurance was the support provided by Atlantic Philanthropies for Health Care for America Now (HCAN), a 501(c)(4) with a 501(c)(3) affiliate, the Health Care for America Education Fund. HCAN was a legislative action campaign with over 1,000 coalition partners that generated thousands of lobbying visits, 873,000 phone calls and over 600,000 faxes to Congress.

For its 2008 launch and its active role in 2009 leading to the 2010 passage of the ACA, HCAN received an investment of more than $25 million from Atlantic Philanthropies. An evaluation of HCAN conducted by Grassroots Solutions and M&R Associates indicated that HCAN had been a “major contributor to passing health care reform,” due in a major way to the Atlantic Philanthropies support that the evaluators characterized as “a calculated gamble that paid off.”

Game over? Declare success and call it a day? Hardly. In some ways, the healthcare reform legislation was simply the starting point of a long, hard slog of implementation that nonprofits have to be prepared to address. It’s time for nonprofits and their foundation backers to redouble their efforts in order to focus on implementation of national health insurance reform. We must not drop the ball now that we come to the tedious but ultimately crucial tasks involved in translating a piece of legislation into a workable program.

Not long after the passage of the ACA, Grantmakers in Health issued one of several reports identifying areas in need of advocacy for the implementation of health reform. The report cited the need for “issue-specific coalitions” to focus on specific aspects of the ACA. It also pointed to a need for developing “overarching blueprints at national and state levels…to identify regulations, timelines, and responsible agencies” in the implementation process. In addition, it considered “defensive advocacy” important in order to fend off attacks such as “state lawsuits and legislation to impede implementation of the PPACA, coupled with challenged state budgets.” There would also be a need, the report said, for “robust outreach and enrollment mechanisms” for the millions of uninsured Americans who would be looking to find new health insurance coverage. After all, the ACA’s passage does not automatically eliminate ongoing challenges in health equity and healthcare delivery.

Then there are the nuts and bolts issues of implementation: operating state-level health exchanges, monitoring the behavior of insurance companies in the states, and getting states to accept expanded Medicaid coverage as a first step toward comprehensive health coverage for lower income people. A publication of the New York State Health Foundation, “Implementing Federal Health Care Reform: A Roadmap for New York State,” adds other issues that have been addressed in the Cohen Report, such as the roles of public and voluntary safety net hospitals under the ACA, the roles of nonprofit hospitals, the functions of community and/or school-based health centers, and the role of state and local health conversion foundations.

But some issues seem to be slipping off of the radar screen, such as capacity building and funding for nonprofit health insurance cooperatives, particularly those that lost funding in the fiscal cliff legislation. What about challenges that may be presented to healthcare consumers by mergers of hospitals and insurance companies, such as the pending merger of Blue Cross Blue Shield of Montana with the Illinois-based Health Care Service Corporation? And who will make sure that we are protecting nonprofit employers’ ability to provide health insurance for their employees? Who will see to it that the ACA’s requirement of community health needs assessments (CHNAs) is used as a blueprint for real healthcare reform as opposed to becoming just one more piece of paperwork?

These issues require on-the-ground advocacy, organizing, and lobbying not just in Washington, D.C., but also in states, regions and even localities across the U.S. Therein lies the challenge for foundations. One foundation speaker at the New York City conference panel noted that there are only a few national health foundations of the size, scope, and geography of the Robert Wood Johnson Foundation, but there are around 300 such foundations that operate at state, metropolitan, and municipal levels, where many of the implementation challenges of health insurance reform will be occurring. What do health foundations have in mind as to their roles in affecting health issues and more specifically the implementation of the ACA?

One foundation panelist laid out the generic forms of how foundation can affect health care: funding direct services, engaging in activity that improves the quality and efficiency of health systems, and influencing public policy to improve health systems. On the public policy front, he noted options of funding research, engaging in the political process when legislation is being considered, helping implement policies, evaluating policies, and devoting resources to train people to engage in the policy process.

Another panelist noted, “If one wants to affect the system, there are ways to affect policy that are not about directly affecting policy.” The bias in the discussion leaned toward the capacity of philanthropy to publish objective information even though facts are often less influential than hard-nosed politics in hyperpartisan Washington, D.C. these days. In fact, he contrasted his foundation’s effectiveness with other more advocacy-oriented foundations, explaining “politicians have no shortage of people…[telling them] you can zig or zag, so we play more of an information role, with no dog in this fight.”

Foundations and Democracy: All Information Is Political, and All Politics Is Local

In light of the success of HCAN’s mass mobilization, it is surprising to hear so much of a continued focus on studies and reports and their potential impact on shaping policy discussions. A current politician and former foundation executive in a general session of the conference suggested that foundations have a higher sense of the impact of their reports and studies on public policies than is actually warranted, but perhaps that more academic approach to advocacy plays out better at the state level, where there may be more opportunities for convergence around a set of facts than at the politically toxic and partisan federal level, where facts seem to have increasingly less sway.

But HCAN aside, the foundations engaged in this discussion of health care reform didn’t seem to be thinking about expressly political, albeit nonpartisan and non-electoral, policy advocacy. None of the foundation panelists mentioned a word about the future of nonprofit hospitals under the ACA nor expressed concern about the future of nonprofit health insurance co-ops authorized under the ACA but slashed in the fiscal cliff bill.

When foundations talk money and power, it’s still frequently a top-down, technocratic approach with experts analyzing and fixing the problem. We still don’t hear as much about empowering people and communities to take on issues and find solutions through a democratic process that they own in terms of its substance and implementation. Maybe that is why nonprofit health insurance co-ops and the potential for community health needs assessments to galvanize communities around health reform didn’t rise higher in the conversation. Those are bottom-up approaches rather than top-down approaches predicated on expert studies.

One foundation panelist acknowledged that his foundation stays far away from politics even though he recognizes that politics, not information, plays the decisive role in policy decisions. Foundation peers did not challenge that statement, which constitutes a clarion call for a change in how foundations support advocacy on healthcare reform implementation. Throughout the “Money and Power” conference, there was much concern about issues of democracy, including challenging the Citizens United-exacerbated dominance of money in elections and working to increase easy access to voter registration. But there is a more fundamental kind of democracy that foundations can support and it involves families and communities engaging in the space of civil society.

In the case of health care, offering such support doesn’t require a long history in the field. Prior to its support of HCAN, Atlantic Philanthropies hadn’t been a big player in healthcare and it doesn’t seem to be now. However, it capitalized a national coalition with grassroots partners to stimulate a dynamic that helped lead to landmark federal legislation. It recognized that public policy advocacy needn’t be the imposition of top-down technical solutions, but could also include support for bottom-up citizens’ advocacy, as it turns out that plenty of organizations and leaders are capable of speaking with and for the millions of Americans who didn’t see their needs articulated and defended by the likes of Aetna, Wellpoint, and assorted pharmaceutical companies.

Now comes the transition from legislating healthcare insurance reform to making it work for tens of millions of Americans. Foundations have long generated policy solutions and tried to sell them through the advocacy process of informing decision-makers, but experts do not always have all the answers. Now, how can foundations also equip citizens and communities to exercise democratic self-governance concerning critical issues like healthcare? When foundations gather to discuss policy, politics, and democracy, it is often hard to hear the latter as much as it merits. Going forward, whether on healthcare or on bridging societal inequities more generally, the nation’s philanthropic community faces the crucial challenge of helping to usher in a democratic form of public policy advocacy that will take place not just on Capitol Hill, but in our nation’s state houses, city halls and local institutions.