The Rosenberg Legacy: From Political Targets to Social Activists 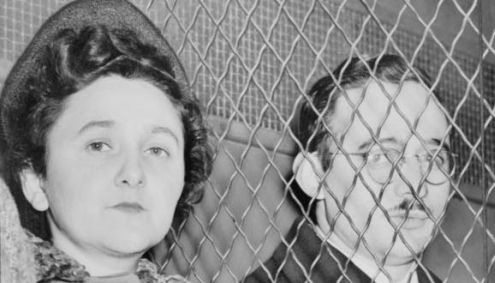 These are topsy-turvy political times. The administration’s domestic surveillance, its use of drones overseas, its efforts to tap the contacts of Associated Press reporters, its stymied efforts at closing the military prison at Guantanamo, and its unprecedented hostility and legal actions against whistleblowers add up to a litany of policies that would probably be much more reviled by the left were they at the hands of George W. Bush rather than Barack Obama. Similarly, the nation has reacted waveringly and tentatively to the purported whistleblowing of Bradley Manning and Edward Snowden, not certain whether to congratulate them as modern-day versions of Daniel Ellsberg or to condemn them as having provided aid and comfort to “the enemy,” whoever that might be.

Speaking out about both Manning and Snowden are Robert and Jenn Meeropol, the son and granddaughter, respectively, of Julius and Ethel Rosenberg. Those of us who grew up as children during the McCarthy era might remember or have been told stories of what happened to the Rosenbergs, Americans who were charged and executed “as traitors who gave the Soviet Union the secret of the atomic bomb.” (Robert Meeropol, for his part, says that his parents conducted industrial espionage during World War II in the belief that they were helping an ally against the Nazis, but denies that they had ever given the Soviets atomic secrets.) By revealing secret NSA surveillance, as Snowden claims to have done, or classified government documents, as the government has charged Manning with doing, these two people, in the eyes of some, are more modern-day Rosenbergs than Ellsbergs.

“The U.S. government used the Rosenberg case to attempt to prove to the public that the international communist conspiracy threatened the American way of life, and claimed fighting communism required that human rights and civil liberties take a back seat to national security,” the Meeropols write. “Today, the U.S. government asserts that danger from the international terrorist conspiracy and their weapons of mass destruction justifies massive surveillance, indefinite detention, and even torture.”

Robert Meeropol described the “nightmare” of a childhood he and his brother suffered as a result of the conviction and execution of his parents. Jenn, the granddaughter, writes, “in 1990, my father started the Rosenberg Fund for Children, a public foundation to help children who are experiencing similar nightmares to what he lived through as a child.” The Rosenberg Fund appears to have become both a center for speaking out about people who are facing prison due to speaking out on public issues, such as environmental blogger Daniel McGowan, and providing assistance to the children of targeted activists for schooling and other pursuits that might be difficult while the parents are fending off investigations and litigation.

The RFC’s website says that the foundation has awarded nearly $5 million to some 1,000 children since it began in 1990. The foundation’s website identified a well known advisory board, including the likes of actress Susan Sarandon, former Congressman Ron Dellums, actor Edward Asner, actor and Broadway star Mandy Patinkin, and iconic actor and singer Harry Belafonte.

Reading about what happened to Robert Meeropol and his brother after their parents’ execution is so very sad. As their children, they suffered in their own ways long after the events, even though Robert was only three and his brother only seven when their parents were killed. There was clearly a tragic element to the Meeropols’ story, even if the Rosenbergs were actually conducting espionage on behalf of the Soviet Union during World War II.

There is also something tragic about the Bradley Manning case, if you listen to the readings of Russell Brand, Maggie Gyllenhaal, Wallace Shawn, and others on the recently released “I am Bradley Manning” video. Will the families and friends of Manning and Snowden, regardless of how the law ends up treating the two, be made to suffer like the family and friends of the Rosenbergs during the depths of the McCarthy era?—Rick Cohen