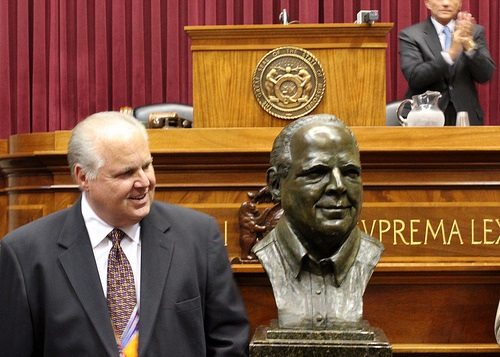 President Obama’s concerns that the economic recovery would go belly up as a result of the sequester clearly didn’t come true. The evidence is manifest in the string of record Dow Jones highs on the New York Stock Exchange. But now, job growth has slowed down, leading some, such as Rick Newman, to posit that “the sequester is more of a slow-release drag on the economy than the fast-acting depressant some economists predicted.” Newman explains that the sequester—“less than half a percent point of total economic activity” in a $16 trillion economy—“was never likely to be catastrophic…[b]ut every loss in economic activity has to be felt somewhere…[and] the sequester is certainly big enough to slow things down.”

Economists have predicted weak second- and third-quarter growth, small businesses surveyed by the National Federation for Independent Business reported cutting back in hiring in May after five straight months of increases, and manufacturing activity has descended to a level that Newman characterizes as “generally considered to be recessionary.”

Taking a different view is radio host Rush Limbaugh, who describes the idea that the economic slowdown is sequester-related, as proposed by the chairman of the White House Council of Economic Advisors, Alan Krueger, as “absolute nonsense.” Limbaugh sees the slowdown intentional strategy on the part of President Obama:

“The economy doesn’t stand a chance as long as this administration is in charge of policies that govern it. It doesn’t stand a chance. Now, the dirty little secret is that what’s happening in this economy is what was intended to happen. We got a lot of people out of work, lot of people not even looking for work, but they’re all eating, they’re all driving, they’re all talking on the telephone, and they’re all watching big-screen TVs. And it’s all made possible by Santa Claus, in their mind, Obama. Who they gonna vote for?”

The fact that President Obama isn’t courting votes any more, restricted as he is to two terms in the White House, doesn’t seem to factor into Limbaugh’s analysis.

Krueger suggests new investment in infrastructure to stimulate job growth, but Limbaugh doesn’t buy that either, at least as practiced by the Obama administration:

It seems logical that a butcher’s-cleaver approach to cutting the budget, rather than targeting cuts to where they would do the least harm to the economy, will inevitably lead to some kind of slowdown, though we were hardly impressed with the rate of job creation prior to this point in the purported recovery. Being smart would require Congress and the White House to end the sequester and reconsider how to make those cuts that are needed with thoughtful analysis and deliberation.

The notion promoted by Limbaugh and others that this is all one big conspiracy orchestrated by the President and his allies to create a class of dependent people who will follow Democrats blindly into the polling booths is a bit beyond the pale. However, nonprofits should see the economic slowdown as a reason to step up their Capitol Hill advocacy and reduce the nonprofit sector’s reluctance to call out the sequester for what it is: bad for human service programs, and bad for the economy.—Rick Cohen