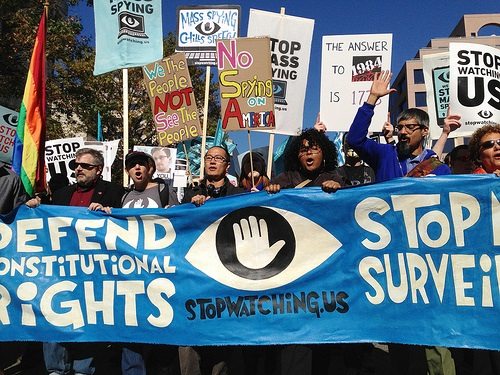 The impacts of Edward Snowden’s NSA revelations haven’t been restricted to the U.S. A quarter of a century ago, the Soviet Union’s domination of Poland ended; a quarter of a century later, President Barack Obama visited Poland along with other heads of state, largely in a show of support for Poland and other countries formerly of the Eastern Bloc against what is seen as recent Russian expansionism toward Ukraine and other countries.

Weakening the U.S. position, some people believe, are the NSA’s mass surveillance practices and the Polish government’s acceptance of those practices, which a Polish human rights nonprofit called the Panoptykon Foundation sees as “reverting back to the much contested practices of the former, authoritarian regime.”

“It is rather difficult to celebrate the anniversary of first Polish free elections in the aftermath of the recent Snowden revelations—indicating that Poland cooperated with US intelligence and delivered vast amounts of telecommunication data (possibly about [its] own citizens),” Panoptykon’s president, Katarzyna Szymielewicz, said on the occasion of Obama’s visit. “How is it possible that until now Polish citizens haven’t heard a word of explanation from their democratically elected representatives with regard to Snowden’s allegations? We still don’t know answers to basic questions: what was the purpose of Polish-US cooperation; who was the target; what sort of data was intercepted and why? If President Obama leaves Poland on the 4th of June without touching on these questions, it will be the failure of Polish democracy. Without accountability and transparency, democracy becomes a facade.”

The U.S. government’s explanations and apologies for the NSA haven’t generated much traction to date. In Germany, as Obama was leaving Poland, the federal prosecutor, Harald Range, announced the beginning of “formal proceedings into allegations that the NSA had monitored [Chancellor Angela] Merkel’s cell phone.”

Doubling down on the mass surveillance revelations of Edward Snowden, the British telecommunications company Vodaphone issued a report detailing the country-by-country demands of 29 governments for access to private individuals’ communications just as Obama was leaving Poland. Deutsche Telekom followed the Vodaphone report with a promise to disclose government requests for the communications information on its 140 million customers. U.S. authorities may not be providing compelling answers to the mass surveillance issue, but Snowden has unleashed a dynamic that others, such as Panoptykon, the German federal prosecutor, and Vodaphone, are keeping alive until the NSA’s policies are modified and corrected.—Rick Cohen