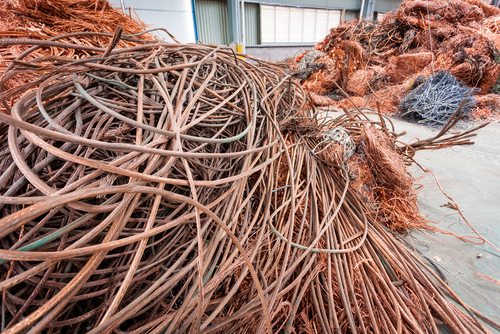 As the worm turns, Detroit is pushing back on copper thieves by selling for itself 13 million pounds of copper wire left over at the Public Lighting Department. Although the city is budgeting for a $25 million haul, a city consultant said that the sale could generate as much as $40 million for the city’s budget hole.

The city has been fighting back against copper thieves and other scrappers in a losing effort for many years, but this new policy of selling copper wiring undoubtedly benefits from the lessons learned from the informal practices of the underground economy of scrappers and the above-ground recycling programs of community organizations that have demonstrated both markets and alternative uses. A Dow Sustainability Fellow Program researcher at the University of Michigan, Nicholas Caverly, launched a study just last month to examine the formal and informal practices of scrappers and community organizations to look at viable alternatives to scrap. Detroit’s emergency financial leaders may actually be trying to get ahead of Caverly’s research and demonstrate a new agile learning curve.

Detroit is on a slow but inexorably upward climb toward reviving municipal government competence after years of serial mismanagement under not only the administration of now-jailed former mayor Kwame Kilpatrick, but under many previous political regimes in the Motor City. There are two major roles in Detroit for nonprofits in this, much like the roles played by nonprofits in other countries with underdeveloped governmental processes and procedures.

One role is in experimenting with and demonstrating the potential and actual capability of government. Those demonstrations include the recycling and redevelopment efforts of nonprofit community-based groups. Smart city administrators, especially those open to learning, would do well to try to tap the knowledge of nonprofits, and nonprofits should be more than willing to share.

Detroit has had plenty of nonprofits with information to share—like Arts & Scraps on recycling issues, with knowledge for the taking. But that’s what the nonprofit sector ought to be doing more broadly in nearly every arena of public life to improve the mechanisms of and knowledge in government. That’s the real public/private partnership in which nonprofits can participate—not to figure out how they (or third party for-profit players) can capture a chunk of public funding, but how governmental agencies and nonprofits together can bring their combined best thinking to the solution of social problems.

A second role for nonprofits is providing direct and concrete assistance to government. The Detroit governmental meltdown feeds into a narrative of overall government dysfunction that has hardly been helped by the recent crises of mismanagement at the federal level in the Department of Veterans Affairs, the Internal Revenue Service, and most recently at the sadly mercurial Centers for Disease Control. Anti-government pundits like the Wall Street Journal’s Bret Stephens see this scene and conclude, “The lesson is that government bureaucracy should be treated, at every level, as inherently and inescapably incompetent.”

What escapes us is how Stephens can perceive a person who goes into government work as incompetent, as opposed to that same person once they leave for a position in the private sector. Stephens’s use of the Obama administration’s track record on Ebola to condemn all government effort ignores the many examples of quite competent public service—much like an assumption that Detroit somehow characterizes the performance of all local government. Nonprofits should see Stephens’s charge against government as tantamount to one raised against nonprofits, many of which deliver functions tied to government programs.

There is nothing about working in the private sector that makes someone preternaturally competent; witness the national economic recession brought on by rapacious mortgage bankers and Wall Street speculators. But at the same time, there should be no latitude given by the nonprofit sector for governmental behavior, whether it emanates from Detroit City Hall or the Centers for Disease Control, which abuses the public trust and undermines the ability of Americans to rely on government to deliver on its mission.

As Detroit learns from community organizations that have long been demonstrating the value of recycling as a tool for municipal development, we should remember that nonprofits have to put their collective shoulder behind government and behind private corporations to make sure that they are functioning to meet the needs and priorities of Americans. That’s part of what nonprofits do in furtherance of their mission of bolstering small-“d” democracy.—Rick Cohen