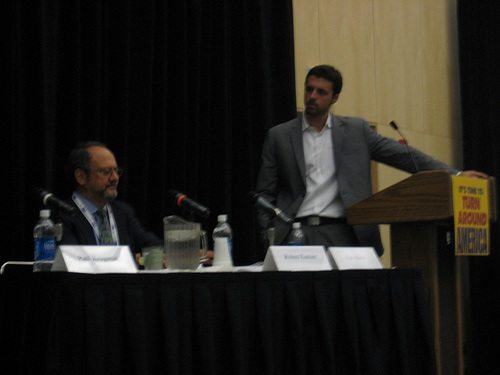 In last week’s Cohen Report, there was a hint that the Affordable Care Act, including specific elements meant to benefit nonprofits, is facing budgetary starvation tactics from congressional Republicans, some of which President Obama’s proposed FY2014 tries to counter. However, the impact of these tactics is clear: Whatever implementation problems were embedded into the law, Republicans’ slashing the budget for the ACA is aimed at making implementation that much more difficult. Ezra Klein laid out the Republican strategy as follows:

“Insofar as the Republican Party has a strategy on Obamacare, it goes like this: The law needs to be implemented. The GOP can try and keep the implementation from being done effectively, in part by refusing to authorize the needed funds. Then they can capitalize on the problems they create to weaken the law, or at least weaken Democrats up for reelection in 2014.

In other words, Step One: Create problems for Obamacare. Step Two: Blame Obamacare for the problems. Step Three: Political profit!”

Republican opposition has threatened major elements of the nonprofit side of the Affordable Care Act, like the nonprofit health insurance cooperatives and provision of health care coverage to very low income Americans. As Klein noted, it is also having a pernicious effect on Democrats. He recounted an exchange between Senator Max Baucus (D-MT) and HHS Secretary Katherine Sebelius at a hearing where Baucus, a nominal Democrat, sounded increasingly itchy about the ACA rollout. Klein didn’t note that Baucus is among the more conservative of President Obama’s allies, was the big promoter of the exclusion of undocumented immigrants from ACA coverage (because it would have been “too politically explosive”), and most recently became one of only four Democrats in the Senate to vote against the compromise-, watered-down background check gun control bill. The impression is that the ability of Republicans to chip away at necessary ACA funding—for example, resources for HHS information and outreach—is chipping away at marginal Democrats’ confidence in the program.

Klein concluded that he “doubt(s) that Obamacare will have an easy or smooth first year [because] (t)he law is big, complicated and unwieldy on its own terms, and Republican congressmen have done enough to withhold funding, and Republican governors and state legislatures enough to withhold cooperation, that implementation is sure to suffer.” Nonprofits should remember Grover Norquist’s threat back in 2001 upon the passage of the Bush tax cuts that his strategy was to starve government of resources so that it could be “drag[ged]…into the bathroom and drown[ed]…in the bathtub.” That’s basically the congressional Republican approach toward the Affordable Care Act.

Given how much of the ACA is geared to the roles and functions of nonprofits—health care centers, hospitals, health insurance cooperatives, and, not to be forgotten, nonprofits as employers– the nonprofit sector ought to fight against the ACA’s starvation diet and ensure that it gets the resources needed for potentially effective implementation.—Rick Cohen