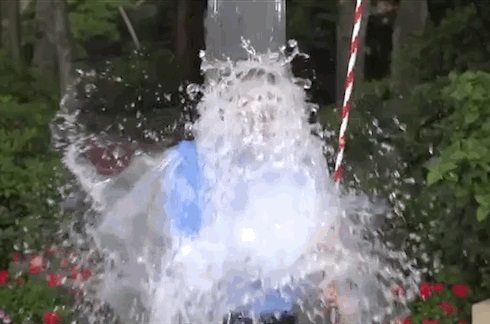 “The ice bucket challenge is a symbol for much that’s wrong with contemporary charity: a celebration of good intentions without regard for good outcomes. It is iconic for what I call donor-focused philanthropy—making charitable giving about the giver, rather than about those who need help.”

MacAskill’s argument rests on two concerns. His first is “that it encourages a culture of great praise for small gifts.” He suggests tactics like the ice bucket challenge are “undermining a charitable attitude according to which there are serious problems in the world that desperately need our help, and that won’t be solved by a garbage pail, a video camera, and some frosty water.” It’s a strategy for donors to feel good (and get a little attention and props), rather than doing something more serious.

His second point more directly addresses the issue of the seriousness of the charitable decision, that such “donor-focused philanthropy…regards all causes as equal…We should reward the charities that we believe do the most good, not those that have the best marketing strategy, otherwise the most successful charities will be those that are best at soliciting funds, not those that are best at making the world a better place.”

Writing for Time, Jacob Davidson, whose father died of ALS, found the ice bucket campaign initially attractive, but then had misgivings. “When I looked closer, I became uneasy,” Davidson wrote. “No wonder it took me weeks to learn the Ice Bucket Challenge was linked to ALS. Most of its participants, including Kennedy and Today’s Matt Lauer, didn’t mention the disease at all. The chance to jump on the latest trend was an end in itself.”

Davidson also mentioned the somewhat negative structure of the campaign, that if you choose not to donate, you dump a bucket of ice water on your head. “The challenge even seems to be suggesting that being cold, wet, and uncomfortable is preferable to fighting ALS,” he noted. If the strategy of dumping cold water was meant to increase awareness of the disease, the strategy has a built-in contradiction: “ALS needs all the awareness it can get, but somehow I doubt many learned a whole lot from contextless tweets of wet celebs smiling and laughing,” he added.

Robert Frank, a well known professor of economics at Cornell University, suggests that the ice bucket campaign may be subject to some form of donor fatigue: “It doesn’t require any particular talent to do it, or any commitment or time,” Frank told Sarah Gray in Salon. “They just have to endure the unpleasantness. So I’m skeptical about this one. I don’t think it’ll last long for that reason.”

Frank called the ice bucket challenge a successful “gimmick.” Victor Fiorillo, a reporter for Philadelphia magazine, called it “stupid,” but added, “like many stupid ideas, it’s working.” Writing for Slate, Will Oremus has started a campaign against the ice bucket challenge, suggesting that people not get a bucket, not dump ice water on their heads, not film themselves and don’t post it on social media, but simply “donate the damn money, whether to the ALS Association or to some other charity of your choice.”

“It’s hard to shake the feeling that, for most of the people posting ice bucket videos of themselves on Facebook, Vine, and Instagram, the charity part remains a postscript. Remember, the way the challenge is set up, the ice-drenching is the alternative to contributing actual money. Some of the people issuing the challenges have tweaked the rules by asking people to contribute $10 even if they do soak themselves. Even so, a lot of the participants are probably spending more money on bagged ice than on ALS research.

“As for ‘raising awareness,’ few of the videos I’ve seen contain any substantive information about the disease, why the money is needed, or how it will be used. More than anything else, the ice bucket videos feel like an exercise in raising awareness of one’s own zaniness, altruism, and/or attractiveness in a wet T-shirt.”

Writing for the Guardian, Suzanne McGee addressed the various criticisms, particularly the notion that giving to ALS as a result of the ice bucket challenge isn’t sustainable and takes away from other worthy, but less fundraising-creative charities. “Alas for our society: as you can see by the booming donation numbers, we’re programmed to respond to just this kind of stunt,” McGee wrote.

“To the extent that the ALS Association has finally found a way to transform a vague awareness of the disease into something viral, and turn it into a source of funds, good for them. No one fussed too much when pink ribbons and yellow wristbands started multiplying,” McGee added. “A once-obscure organization has become surprisingly effective at fundraising and will be able to do much, much more for its beneficiaries. If all nonprofits become more creative, maybe it will inspire more of us to ramp up our giving.”

Does it matter whether the charitable giving is thoughtfully considered or simply the result of a fundraising gimmick? That’s the real core issue here.—Rick Cohen