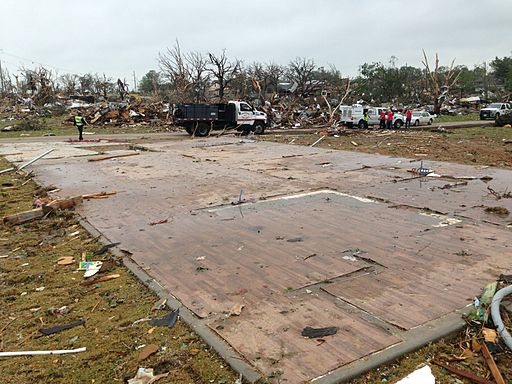 It was terribly sad to learn that the tornado that hit Granbury, Texas last week, completely demolishing much of a residential neighborhood, had taken the bulk of its toll on a development constructed by the nonprofit Habitat for Humanity. In the Rancho Brazos neighborhood, Habitat and residents built some 61 homes. Many of the homes were destroyed, and others were damaged by the winds and baseball-sized hail. Two more Habitat homes were under construction when the tornados swept through; one that was ready to be dedicated on the weekend was completely destroyed.

The Habitat homes in Hood County cost only a little over $50,000 to build, not including the 300 hours of work that families contribute as “sweat equity” toward their purchases. In a way, that makes the devastation that much worse. For many Habitat families, their homes are really the products of their own labor, without which they would not qualify for the program. Since all of the Habitat purchasers are low-income, their homes are just about all the equity they possess in the world. Losing these homes is beyond simply losing a place to live, which might be covered by insurance; it is losing the product of hopes, dreams, and sweat.

The Habitat for Humanity International website reported that 58 out of 60 Habitat homes were damaged or destroyed. In the entire neighborhood of 110 houses, Habitat and others, 100 homes were damaged and 66 made unlivable, as reported by Red Cross spokeswoman, Anita Foster.

The reports, still conflicted almost a week after tornados struck Granbury and other parts of North Texas, aren’t surprising in light of such devastation in a small community. At least six people were killed in the twisters and 53 people were injured. The Hood County Habitat affiliate that sponsored the development has pledged to rebuild.

Good intentions and property insurance notwithstanding, the displaced and grieving families of the Habitat community in Granbury will face challenges in the process of recovery and rebuilding. With a population of less than 8,000 according to the 2010 U.S. Census, Granbury is considered a suburb of Fort Worth, and therefore may benefit from proximity to charitable and philanthropic disaster relief giving and wealth not typically available to other small communities—think of West, Texas, devastated by a fertilizer plant explosion, which has raised comparatively little money to compensate the families of those injured or killed, much less provide rebuilding support to the neighborhood adjacent to the factory that was pretty much flattened.

Already, several organizations have begun fundraising efforts to help Granbury recover, including the Red Cross, the Salvation Army, the Humane Society, and the Habitat for Humanity chapter in nearby Dallas. Habitat for Humanity International announced a $5 million fundraising effort to help the area rebuild, with the GM Foundation making what appeared to be a lead donation of $500,000. Will donors step up for Granbury? We hope that citizens and nonprofit activists from the area will keep Nonprofit Quarterly up-to-date with the status of Granbury disaster fundraising and how the funds end up being used.

Whatever the issues are regarding the relief efforts in Granbury, they will clearly be amplified and underscored by last night’s devastation in Moore, Oklahoma.—Rick Cohen