The results of the 2020 Census will provide government with the data it needs to make critical decisions. With the power to affect the future, the work being done right now to lock in how the count will be conducted is of great import. Each state’s share of the 435 House of Representative seats is determined by its census-determined population; legislative power and electoral clout flow directly from the resulting reapportionment. Decisions about where to direct more than $600 billion in federal funds, which will affect many nonprofit organizations, will be driven by the updated picture of the nation’s population. Effective organizational planning depends on accuracy of the data provided by the census.

Facing a March 31st deadline to lock in the format of the 2020 effort, this week, the Trump administration refused to approve a proposed change to how data about national and ethnic origins would be collected. According to NPR, the proposed new questions “would change how the [Latinx] population is counted and create a new checkbox on federal surveys for people with roots in the Middle East or North Africa. Research by the Census Bureau shows these revisions could improve the accuracy of the upcoming national headcount.” These changes would better reflect the new ways people understand race and ethnicity and produce a more accurate count. 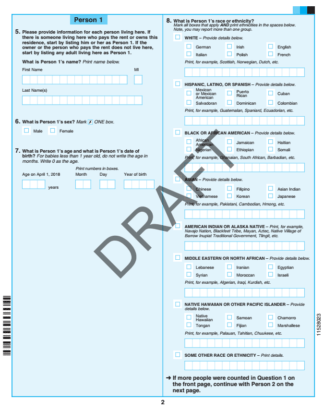 Instead of approving the new format, which was first proposed during the Obama administration, the 2020 Census will fall back to the older formulation, in place since 1997. The old format asks separately about race and national origin and does not include an option for Middle Eastern/North African. The Census Bureau says that with a critical test run of the 2020 census set to happen, they did not have time to finish thinking through the proposed change: “In order to ensure that the systems fielded in the 2018 End-to-End Census Test are consistent with the design for the 2020 Census, the Census Bureau made the decision to redesign the systems supporting data collection in this test to be consistent.”

The potential impact from not gathering this data accurately is illustrated by the Census Bureau’s estimate, according to the Wall Street Journal, that the 2010 Census, using the framework to which the Census Bureau now wants to return, “undercounted Hispanics by 1.5 percent while it overcounted white non-Hispanics by 0.8 percent.”

The Census Bureau’s decision raised red flags for those who fear the Trump administration is trying to frame the count in ways that strengthen and reward its base. Michael Gonzalez, senior fellow at the Heritage Foundation, speaking to the Wall Street Journal, “applauded OMB’s delay…‘I don’t think the government should be going out of its way to get people to obsess about ethnicity. We’re losing sight of our common identity.’”

Colorlines pointed to a statement of concern issued by Vanita Gupta, president and CEO of the Leadership Conference on Civil and Human Rights.

America is more diverse than ever. Accurate, detailed data are an essential tool for ensuring equal opportunity and access to the nation’s institutions and resources for all people, but especially those who have been victims of discrimination historically. The Trump administration has clearly bowed to opponents of diversity and those who view immigrants as a threat to the nation’s future, rather than as a defining characteristic of our nation’s strength and leadership in the world.

This is not the first political controversy to roil the Census waters. Attorney General Jeff Sessions has recently requested the addition of a question about citizenship, which was seen by critics to depress the counting of the Latinx population. The Republican-controlled Congress has limited the Census Bureau’s budget to the point that the Government Accountability Office has added the 2020 Census to its list of “agencies and program areas that are high risk due to their vulnerabilities to fraud, waste, abuse, and mismanagement.” What’s more, the administration has not yet nominated a new director for the Bureau.—Martin Levine