Trying to Make Sense of What Happened at the Boston Marathon 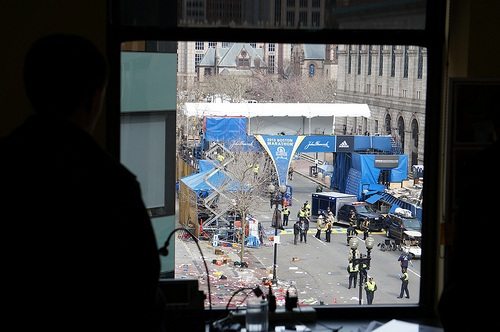 The most potent representative symbol of the bombing at the Boston Marathon yesterday—the explosions that took at least two lives and maimed so many others—must be the image of the violent fluttering of a set of international flags in the force of the blast. It was as though they were all trying to flee, but were – together – tethered to the scene.

Terrorism is often deeply about symbolism heaped on violence and there were a lot of possible symbols for deranged minds. Yesterday was Patriot’s Day in Boston and it was the day income taxes were due into the hands of the IRS. It was also a major peaceful international event due to the marathon, and a time when you not only have a guaranteed crowd of close to a half million, but a full complement of world press watching every moment of what was to have been a traditional spring event. It was a moment tailor-made for someone intent on symbolic crowd violence.

A friend wrote yesterday about the broader implications of events like this saying,

“It occurs to me that no one can easily escape the descending cloud of gloom that such things cause even if that may be a prime purpose of the attackers.  That fear and sadness can go on for a long time, even if it gets sublimated.  Such things are harmful in so many ways.

Our desire for a trusting social environment, where you can for example easily hold a marathon or a public assembly, are undermined and short-circuited by this. Not to mention our hopes and dreams for more emancipatory social arrangements that eradicate poverty, end war or cure the ills of humanity.  The practical thing to do becomes not to trust anyone, install cameras everywhere, hire more cops, soldiers and consultants, and adopt pervasive security consciousness.”

The news reports showed many people fleeing in panic after the blasts and a number of people who ran just as purposefully to those who had been wounded, apparently ripping off their own clothing to use as tourniquets. That is the light in this terrible moment and it is the spirit of the world community most of us want to inhabit but we must work at it every day to make it happen.

Today though, we pause to remember Martin Richard, the little boy who died, and his sister and mother who were badly injured. Both parents are active civic leaders in the Ashmont-Adams neighborhood according to the Dorchester Reporter.—Ruth McCambridge