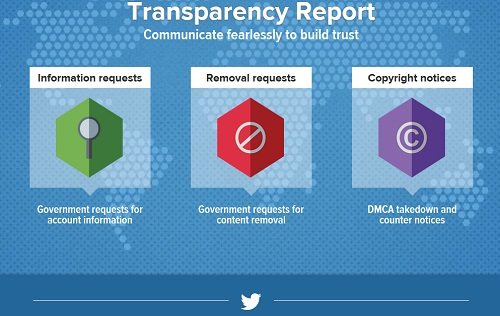 On Tuesday, Twitter made a public announcement that it will be filing a lawsuit against the United States government for violating its First Amendment right to freedom of speech. Twitter is specifically suing the Department of Justice and the FBI for not allowing the organization to publish a Transparency Report, which would reveal how many national security letters (NSLs) and Foreign Intelligence Surveillance Act (FISA) orders Twitter receives. After providing a draft of the report to the Department of Justice and taking part in months of negotiation, Twitter was unable to get the government “to allow us to publish even a redacted version of the report.”

Twitter seeks to lawfully publish information contained in a draft Transparency Report submitted to the Defendants on or about April 1, 2014. After five months, Defendants informed Twitter on September 9, 2014 that “information contained in the [transparency] report is classified and cannot be publicly released” because it does not comply with their framework for reporting data about government requests under the Foreign Intelligence Surveillance Act (“FISA”) and the National Security Letter statutes. This framework was set forth in a January 27, 2014 letter from Deputy Attorney General James M. Cole to five Internet companies (not including Twitter) in settlement of prior claims brought by those companies (also not including Twitter) (the “DAG Letter”).

The Defendants’ position forces Twitter either to engage in speech that has been preapproved by government officials or else to refrain from speaking altogether. Defendants provided no authority for their ability to establish the preapproved disclosure formats or to impose those speech restrictions on other service providers that were not party to the lawsuit or settlement.

The U.S. government is thus censoring Twitter’s ability to respond to statements about their own community’s surveillance, and denying Twitter the constitutional right to speak out on matters of national and global concern.

Twitter is currently one of the largest social networks providing a platform for social change movements nationally and worldwide, and filing a suit against the government in such a public way is a significant statement. Apple and Google also just made a recent statement of their own protesting against mass surveillance, announcing that their new operating systems will contain passcodes that will trigger encryption inaccessible to law enforcement—which the FBI was less than happy with. Will other companies follow Twitter’s lead and fight back against government censorship?—Aine Creedon