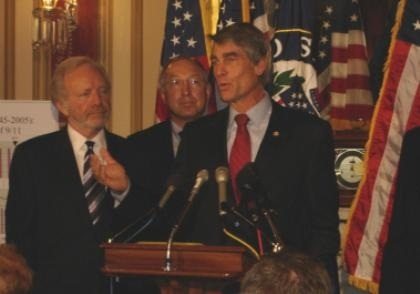 It seems like the public at large, and perhaps much of the nonprofit sector as well, doesn’t find the sequestration budget cuts much to worry about. A fix for air traffic controllers, another one for USDA meat inspectors, and somehow the public seems willing to let the rest of the sequester’s blunt-axe approach to budget-making slide.

Perhaps that explains why the PBS NewsHour describes Senator Mark Udall (D-CO) as “lonely” in his effort to end the sequester. Confronting the public’s sequestration apathy, Udall told the NewsHour, “I worry that there’s a tipping point with sequestration where the cuts suddenly add up to more than the sum of the parts.” He added, “Given the fragile economy we have and the nascent signs of recovery, it just seems to me we ought to think and act more like a businesswoman would, which is to target your cuts, not do them across the board in this simplistic, blunt way.”

His solution, a bill co-sponsored with Senator Susan Collins (R-ME), is to allow all federal agencies the kind of budget flexibility (which Udall helped negotiate) that Congress gave the Federal Aviation Administration for the air traffic controllers. Essentially, this is the power to move money between budget lines based on the agencies’ determination of priorities.

Udall is a very capable senator, so he must know that there is a significant downside to the Udall/Collins strategy. For one, it gives unelected agency administrators the power to make funding choices, determining which programs have greater or lesser importance. For example, imagine if a HUD Secretary were to cut Section 8 housing vouchers in order to maintain or increase single-family homeownership subsidies, or vice versa. Even though there are 41 million renter households in the U.S., generally with half the income of homeowners, and only one in four who are qualified for housing subsidies actually get them, the U.S. provides disproportionately more subsidies to homeowners through the mortgage interest deduction and other mechanisms. Would single-family homeownership lobbyists influence the sequestration-balancing decisions of HUD administrators? Similar dynamics would undoubtedly occur in other federal agencies. Like the air traffic controllers issue, the choice of priorities could come down to who has the lobbying juice.

Another problem, of course, is that this is only the first year of the sequester. Next year will bring another round of across-the-board cuts, leaving this process to occur year after year, hoping that administrators armed with a potential Udall/Collins bill will make good intradepartmental, interprogram budget transfers.

Udall knows that the real answer is to fix sequestration now and for the long term. In that quest, Udall really is a lonely guy, lacking the nonprofit lobbying mobilization that would be necessary to save Section 8 rental housing vouchers, preschool children’s Head Start slots, and seniors’ access to Meals on Wheels.

This year, the voices of nonprofits about the concrete impact of the sequester, not the hypothetical or the feared, are more necessary than ever. Otherwise, get ready for the beginning of round two starting a few months from now.—Rick Cohen

More about: Electoral and LobbyingNonprofit NewsPolicy