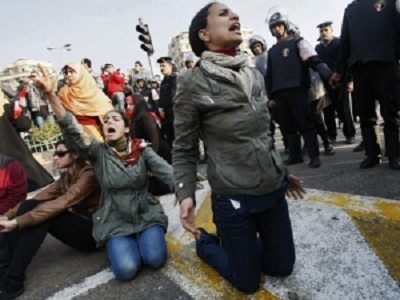 According to a spokesperson from the United Nations’ Office of the High Commissioner for Human Rights (OHCHR), High Commissioner Navi Pillay has expressed concern over Egypt’s conviction of 43 NGO workers last week. The workers were convicted based on a “vaguely worded” article in the penal code, which is a holdover from the reign of President Hosni Mubarak and has often been interpreted in ways seen as restricting the right to association. Most were most convicted in absentia and they are appealing. UN Secretary-General Ban Ki-moon said in a statement on Wednesday that the conviction and sentencing of a number of local and foreign employees of international non-governmental organizations (NGO) is a sign of “an increasingly restrictive environment” for civil society in the country.

OHCHR spokesperson Rupert Colville told journalists in Geneva, “Provisions regulating the right to association should be interpreted and implemented in conformity with the relevant international jurisprudence.” Colville added that restrictions should align to international human rights obligations, especially Article 22 of the International Covenant on Civil and Political Rights, which was ratified by Egypt in 1982 and stipulates that “everyone shall have the right to freedom of association with others, including the right to form and join trade unions for the protection of his interests.” Egypt’s legislature is, in fact, now revisiting its laws related to free association.—Ruth McCambridge