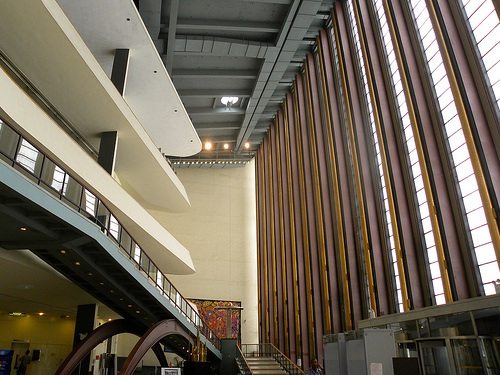 The United Nations General Assembly is convening in New York City this week. The intrigues concern what might be said about the chemical weapons deal concerning Syria or whether President Obama will shake hands with Iran’s President Hassan Rouhani. That’s what the press will cover.

Not a lot of newsprint will be devoted to the Convention on the Rights of Persons with Disabilities (CRPD) or the need to make “the way forward, a disability-inclusive development agenda toward 2015 and beyond.” At a meeting of the General Assembly, attended by the UN Messenger of Peace, singer/songwriter Stevie Wonder, Secretary-General Ban Ki-moon explained, “far too many people with disabilities live in poverty. Too many suffer from social exclusion. Too many are denied access to education, employment, health care, and social and legal support systems.”

Some 134 of the 191 or so member organizations of the United Nations have signed and ratified the CRPD, the text of which is here. Surprisingly, President Obama on behalf of the U.S. signed the Convention in 2009, but the Congress hasn’t officially ratified it. As of last year, the U.S. Senate had been convinced by conservative Republicans, including former Senator Rick Santorum, to oppose the Convention as a possible sacrifice of elements of U.S. sovereignty—the Senate needed 66 votes to ratify the Convention, but only got 61 votes in favor in December.

Is the Convention on the Rights of Persons with Disabilities important to the U.S. domestically? Consider the latest Bureau of Labor Statistics on the employment of persons with disabilities. As of August 2013, the labor force participation rate of persons with disabilities had fallen to 20.5 percent (from 23.1 percent in August of 2008) and the unemployment rate for persons with disabilities had risen to 14.1 percent (from 10.5 percent, again, in August 2008). Think about how those statistics might be different if the U.S. were fully implementing the Americans with Disabilities Act (ADA) to address discrimination in the workplace or the failure of employers to make workplace accommodations. It’s in U.S. law—and it is the basis, oddly enough, for the CRPD, which was designed to establish the ADA’s standards internationally.

Retired Army Colonel David Sutherland, the co-founder and chairman of the Dixon Center for Military and Veterans Community Services at Easter Seals, writes in an op-ed that the Convention is being re-introduced in the Senate again and calls for the senators to join veterans such as John McCain, John Kerry, and Bob Dole who spoke out as senators in 2012 in favor of ratification. It is truly significant that Col. Sutherland, from his position at Easter Seals, dedicated to the improvement of conditions for the disabled, cites the importance of the Convention to disabled veterans. It is not like the U.S. has all the problems solved by a long shot. But Sutherland quotes then-senator John Kerry, who said, on the floor of the Senate, that the Convention on the Rights of Persons with Disabilities “says that you can’t discriminate against the disabled. It says that other countries have to do what we did 22 years ago when we set the example for the world and passed the Americans with Disabilities Act.” It’s time for the U.S. to show some important international leadership and heed the words of Ban Ki-moon, John Kerry, and Dave Sutherland.—Rick Cohen

On November 24th of last year, Rick Santorum exhorted 36 Senate Republicans to refrain from signing the Convention. To read our coverage of that event, click here.