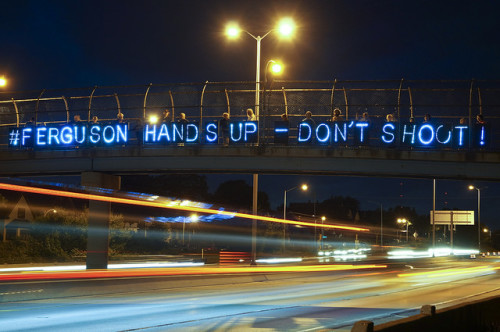 Try to follow us here. The Department of Justice is expected to withdraw the suit it filed against the city of Ferguson after the City Council, which had in February reneged on an agreement meant to reform the police and courts in that city, reversed itself on Tuesday night and voted to accept the conditions. The vote on Tuesday was unanimous, as was the original vote to reject the agreement it had negotiated with the DOJ.

As readers will recall, Ferguson, Missouri, became the focus of an investigation by the Department of Justice after Michael Brown was shot by police and the town erupted in protest.

The reforms are aimed at ending racially discriminatory policing, but also at a system of revenue generation that preyed on poor residents through a system of escalating fines that often ended in imprisonment. The DOJ report on which the rejected agreement was based found, among other things, that African Americans were overwhelmingly the victims in excessive force incidents and that the courts and police cooperated in criminal justice practices that acted as a moneymaking venture for the city. From the DOJ report:

Ferguson’s law enforcement practices are shaped by the City’s focus on revenue rather than by public safety needs. This emphasis on revenue has compromised the institutional character of Ferguson’s police department, contributing to a pattern of unconstitutional policing, and has also shaped its municipal court, leading to procedures that raise due process concerns and inflict unnecessary harm on members of the Ferguson community. Further, Ferguson’s police and municipal court practices both reflect and exacerbate existing racial bias, including racial stereotypes. Ferguson’s own data establish clear racial disparities that adversely impact African Americans. The evidence shows that discriminatory intent is part of the reason for these disparities.

About the court-based practices, Attorney General Loretta Lynch said, “These violations were not only egregious, they were routine. They were encouraged by the city in the interest of raising revenue…They were driven, at least in part, by racial bias and they occurred disproportionately against African American residents of Ferguson.”

The city originally rejected the agreement due to the costs associated with implementation, which were estimated at nearly $7 million. The Justice Department then, as expected and promised, filed its lawsuit, which would have cost nearly as much in legal fees.—Ruth McCambridge