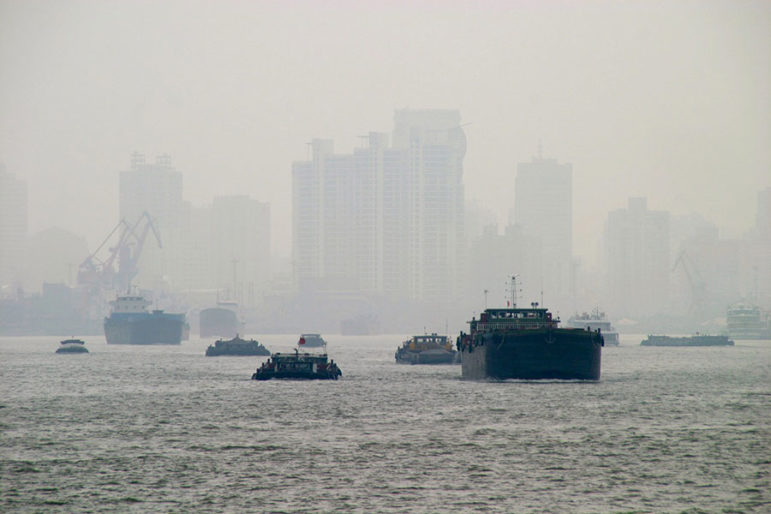 In a new UNICEF report, the U.N. children’s agency declares that approximately 300 million children, or about one in seven worldwide, are exposed to highly toxic levels of air pollution (at least six times World Health Organization guidelines). Satellite imagery developed by NASA indicates that some 220 million of these children live in South Asia.

UNICEF executive director Anthony Lake said air pollution was a “major contributing factor in the deaths of around 600,000 children under five every year,” causing illnesses such as pneumonia. “Pollutants don’t only harm children’s developing lungs—they can actually cross the blood-brain barrier and permanently damage their developing brains—and, thus, their futures,” he said in a statement.

Approximately 2 billion children (90 percent) are breathing air that is deemed a “long term hazard” because it exceeds the level that the WHO considers unhealthy. This noxious cocktail of solid particles and gases like car emissions, chemicals from factories, dust, pollen, and mold spores have an outsized impact on children: Their lungs are still developing; they “breathe twice as fast, taking in more air per unit of body weight, compared to adults.”

Both outdoor pollution and indoor air pollution (such as smoke from solid fuels used in cooking) cause the damage. The WHO long ago declared air pollution to be world’s “single biggest environmental health risk.” And it is getting worse, with levels of air pollution rising eight percent in the last five years. UNICEF is using this report to call on world leaders to hasten their collective efforts to reduce air pollution, saying it leads to more annual deaths of children than malaria and HIV/AIDS combined.

On October 5, 2016, the threshold for “entry into force” (ratified by enough countries to become international law) of the Paris Agreement, was achieved. This agreement within the United Nations Framework Convention on Climate Change saw the world’s three largest polluters (the U.S., China and India) joining the other parties in committing to zero net climate pollution by 2100. Altogether, the 89 countries to date represent more than 63 percent of global emissions. A country must wait three years before it can ask to withdraw from the Paris Agreement. Then there is a one-year delay before the withdrawal actually takes effect.

The CMA1 meeting is required to fully implement the Paris Agreement. This includes the work program established at COP 21 to put in place various procedures and guidelines for transparency, communications, and to implement and promote compliance. These important technical decisions require adequate time to be negotiated. All countries that intend to join the Paris Agreement would like to have the opportunity to participate in making these key final decisions. However, many countries will be unable to complete their domestic approval processes this year.

The agreement relies on voluntary pollution-reduction pledges from its members. The parties are not legally bound to cut pollution by a certain amount in a certain timeframe. Countries devise their own plans that they pledge to carry out.

The terms of the Paris Agreement require reporting and transparency, but it’s unclear if the treaty could be used to punish countries for non-compliance. This new UNICEF reports reminds the world’s leaders that dying children should be punishment and shame enough. Ramping up the use of clean, alternative energy sources offers the best return on investment in terms of improved public health for expanding populations. The Paris Agreement creates the framework for pushing the world out of the fossil fuel era. That the world now agrees on that audacious goal is cause for celebration. That one in seven children worldwide are still exposed to highly toxic levels of air pollution is cause for resisting complacency.—James Schaffer