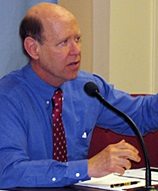 As readers may have noted in other recent newswires (as here and here), there is an increasing number of proposals for changes to social welfare policies being advanced. Gene Steuerle makes such a proposal in the latest entry in his blog, “The Government We Deserve,” which summarizes testimony he delivered at a joint meeting of two House subcommittees—the Subcommittee on Human Resources of the Committee on Ways and Means and the Subcommittee on Nutrition of the Committee on Agriculture. When Steuerle, a senior fellow at the Urban Institute, weighs in on social policy and taxes, it merits a joint congressional committee meeting.

“Despite the rhetoric about living in an age of austerity, we live in a time of extraordinary opportunity. On a per-household basis, our incomes are roughly five times higher than at the beginning of the 20th century, 60 percent higher than when Ronald Reagan was elected president in 1980, and 4 percent higher than right before the Great Recession. Total federal, state, and local government spending on social welfare alone, including health and retirement, has grown even faster, and now surpasses $35,000 per household…. The most important long-term question is how to direct the new resources that economic growth makes available.”

Without debating in detail which social policies of the past have worked more or less well, Steuerle’s approach is to set some priorities for what the nation should be trying to achieve in social welfare policy. Suggesting that neither the American public nor members of Congress want “simply more of the same,” he argues that a 21st-century social welfare budget should “place greater relative focus on opportunity, mobility, work, and investment in human, real, and financial capital.” The new or different emphasis in that agenda, he says, is a social welfare policy emphasizing mobility and opportunity.

Steuerle is honest enough, unlike many politicians, to acknowledge that adding or increasing a focus on mobility and opportunity means not doing other things. He cites his well-received 2014 book, Dead Men Ruling, in which he contended that “the politically unattractive option of reneging on promises to the public has been turned into a requirement…Simple math tells us that to reach budget sustainability, Congress and the President must…renege on past promises to the public to maintain automatic benefit growth rates and not raise taxes.”

The point of Dead Men Ruling, however, is that many of the options that should be available to today’s policy makers have been foreclosed by the past decisions of their predecessors. Steuerle explained this conundrum in a 2014 interview:

“Today’s government is constructed and constricted by programs and policies that were designed by men (women, too, but they were largely excluded) decades ago, many of whom are not with us today. Many of these programs were well designed to improve the economic and social welfare of Americans at the time they were created and some years into the future. But the world has moved on, and these programs have not… For the first time in American history we have long-term spending obligations that cost more than all the revenues we could ever take in. These long run fiscal imbalances arise from long-standing programs (including tax subsidies) that in many cases are legally required to grow forever faster than the economy—which, of course, is impossible.”

In his congressional testimony, Steuerle explained that Congressional Budget Office projections indicate government spending and tax subsidies, including payments of interest on the federal debt and expenses for mandated programs, will increase by more than $1 trillion a year through 2025. It leaves little latitude for congressional compromise when the options may be already foregone.

If the emphasis should turn to opportunity and mobility, what social welfare policies should be pursued? Steuerle makes a very persuasive case for addressing the negative effects of the combined marginal tax rates on lower income households, as high as 60 percent on households with children receiving Earned Income Tax Credits, food stamps, and government-provided or –subsidized health insurance as families shift to full-time or higher paid work. For lower income households moving into the labor market, raising their incomes, if you add in housing assistance plus transportation and child care costs, the marginal tax can be as high as 75 percent. It is hard to imagine that the effects of these financial penalties do not add up to disincentives for lower income people moving up the income ladder in the job market. Both liberals and conservatives have tended to discount, he suggests, the impact of these marginal taxes on the poor, but then Steuerle asks, “Why as a society [do] we worry about 40 percent tax rates on the rich if 50 or 100 percent tax rates on poor and moderate income households have little or no effect.”

What should be done? In reviewing the various levels of marginal tax disincentives built into existing social welfare programs, Steuerle reminds us, “Design matters greatly…The more important question for the future is how we can create a better social welfare structure that still provides a safety net but with fewer distortions and unintended or undesired consequences…What do we want…[a] future system to look like?”

Part of addressing the cacophony of different marginal tax rates in programs such as EITC, SNAP, Medicaid, Social Security, child tax credits, TANF, Section 8, and others, Steuerle indicates, might be explored through pilot efforts that allow for social program integration and reduce the economic penalties on low-income people entering the job market or moving up the income ladder. By fashioning approaches to the needs of low-income people that integrate programs and target benefits to emphasize work and opportunity, Steuerle thinks the nation might be able to make some headway in overcoming the dead hand of long-gone congressional legislators who concocted programs that in the aggregate serve as disincentives to social progress.—Rick Cohen