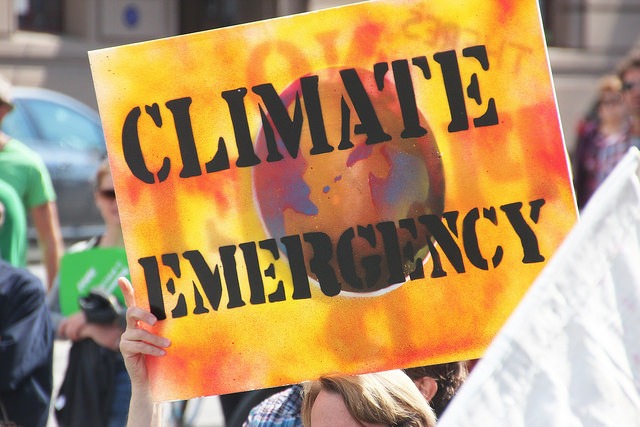 The recently deposed prime minister of Australia, Tony Abbott, was known for having described the science of climate change as “absolute crap.” With that statement, Abbott could have been elected a member of the U.S. Congress. He would have joined Senator James Inhofe (R-OK), the chair of the Senate Environment and Public Works Committee who is the author of a book on the subject, The Greatest Hoax: How the Global Warming Conspiracy Threatens Your Future, and eight of out ten other Republican members of Congress whose opinions about manmade climate change range from deep suspicion to outright rejection.

However, Abbott actually changed his mind about climate change, even approving as a goal for Australia the reduction of its carbon emissions by 26–28 percent by 2030. Though reportedly not quite as hostile to climate change science as his predecessor, new Prime Minister Malcolm Turnbull, who’s also a member of the conservative-leaning Liberal Party, appears unwilling to alter the Abbott target on carbon emissions, even though it is seen by many as too low.

For Americans, even those climate-change-denying members of Congress, it is worth watching what Australia does. The Lancet reports that climate changes in Australia have had a devastating effect, including a recent unprecedented heat wave in Southern Australia and the bleaching that is devastating Australia’s coral reefs. Nicholas Talley, the president of the Royal Australasian College of Physicians, announced last week the launch of Doctors for Climate Action, advocating that a physician’s duty of care extends to the promotion of the health of their patients and communities by necessitating action on climate change.

The initiative is centered around a consensus statement titled, “Act Now to Reduce the Damaging Health Impacts of Climate Change,” which posits the following:

The devastating impacts of climate change on human health across the globe can no longer be ignored. Extreme weather events, disruptions to food and water supply, loss of livelihoods, threats to human security and alterations in climate-sensitive disease distribution and frequency will all be exacerbated by unchecked climate change. These have serious consequences for physical and mental health and well-being.

Furthermore, the evidence suggests that countries that contribute the least to climate change are most likely to be severely affected. Many have limited resources to allow them to adapt to climate change and their health services already struggle to cope with the burden of climate-sensitive disease.

States must commit to meaningful measures to circumvent the adverse health effects of climate change that threaten us all. It is imperative that States commit to investing in climate change mitigation measures and in assisting lower income countries to do so.

Senator Inhofe might not sign the RACP statement, given that he believes that God alone, not humankind, has the power to affect climate. He even challenged Pope Francis on climate change, apparently having a stronger line to the divine than the Pontiff.

The editor-in-chief of The Lancet, Richard Horton, is given credit for officially co-launching the Doctors for Climate Action initiative with the RACP’s Talley. Why the emphasis on Australia? Beyond the devastating indications of climate change currently affecting the continent, Horton explains, “Climate action for health was born in Australia.” As champions for the issue, he cites Tony McMichael, an Australian environmental epidemiologist who, through research on the health consequences of climate change, “did more than anyone to make climate a medical issue”; Fiona Armstrong, who founded Australia’s Climate and Health Alliance; and Tim Flannery, the author of Atmosphere of Hope.

“Many nations—and health professionals,” Horton writes, “could do little better than look to Australia’s leadership for inspiration, and achievement.”

That is a policy statement on climate change and health that even meets the high bar set by the Australian medical establishment and Australia’s environmental advocates such as Flannery, Armstrong, McMichael, and Horton. Perhaps some of the RACP consensus statement will influence the thinking of Prime Minister Turnbull, and the APHA and AMA policy positions will seep into the brain of Senator Inhofe. Sadly, we have more hope for Turnbull than Inhofe.—Rick Cohen