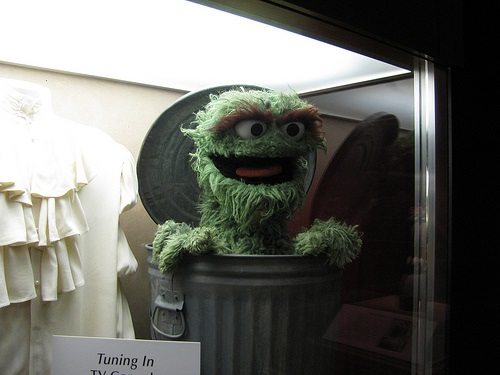 For a federal government that has lately stumbled through some tone-deaf moments, the Department of Veterans Affairs always establishes new pinnacles—or depths, depending on one’s perspective—for cluelessness. Here’s the latest.

An 18-page training slide show for VA staff on “helping” veterans file for and access support for their claims uses the Muppet character Oscar the Grouch as an avatar for veterans themselves. Nice touch. If we remember correctly, Oscar lived in a garbage can on Sesame Street and was known for his generally misanthropic demeanor. In the training program, VA staff are told that veterans might be “demanding and unrealistic” in their interactions with the VA. The Oscar training materials were to be used in town hall meetings for veterans and VA staff in Philadelphia.

Given the VA’s just-about-criminal behavior toward veterans waiting interminably for hospital appointments that never happened or were never even meant to happen due to fraudulent waiting lists, using Oscar as the image of veterans filing claims for assistance is astoundingly misguided, if not truly insulting to the men and women who have served with the U.S. military in Iraq and Afghanistan.

“The training provided was not intended to equate veterans with this character,” VA spokeswoman Marisa Prugsawan told the Inquirer. “It was intended to remind our employees to conduct themselves as courteously and professionally as possible when dealing with veterans and their concerns.” Somehow, Prugsawan was unable to identify whether a regional office or the national VA had created the documentation, though she said it appeared to be an old internal document.

Nonetheless, the Philadelphia VA office had been prepared to use the slide show, titled, “What to Say to Oscar the Grouch—Dealing with Veterans During Town Hall Claims Clinics,” at a Philadelphia town hall meeting. VA employees were also advised in the training to take breaks to cope with the stress they might face from the grouchy veteran Oscars seeking help.

After the Inquirer latched on the dealing-with-grouches training program, members of Philadelphia regional VA staff were instructed by email to “not respond directly to any media inquiries.” That is consistent with the closed-door approach that VA superiors have adopted and tried to enforce among VA regional staff in other parts of the nation.

Representatives of Veterans Service Organizations such as the Veterans of Foreign Wars (VFW) and the AMVETS excoriated the VA for its all-too-obvious stupidity. New VA Secretary Robert McDonald soon after issued a formal apology for the training materials and ordered a review of VA’s training curricula and documentation.

Is Oscar a one-time miscue by the agency, or is it reflective of a pervasive, veteran-disparaging culture in the Department of Veterans Affairs that is supposed to serve veterans? We think that what’s wrong in the VA is not simply a few rogue staff mucking up hospital appointments in Phoenix or using troubling training materials in Philadelphia. As we have seen in marketing and branding mistakes in the nonprofit sector, while some problems may be due to a PR person taking leave of good sense, often they emanate from a troubled, disconnected organizational culture. Secretary McDonald is going to have to conduct a major overhaul of the agency, not simply prune VA training materials that might contain inappropriate imagery. If the agency is going to solicit help from Sesame Street, perhaps turning to Kermit, Bert and Ernie, and Grover as image consultants might be better than relying on the advisors the VA currently seems to favor.—Rick Cohen