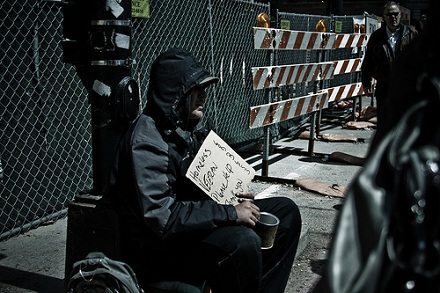 Maricopa County, Ariz. greeted Memorial Day with a commitment of $3.8 million in federal Neighborhood Stabilization Program funding to purchase and convert an existing housing development into 46 one- and two-bedroom units. The sponsor is Catholic Charities Community Services. The beneficiary population is veterans and homeless individuals and families, though with a maximum apartment size of two bedrooms, the likelihood that there will be large families moved into the development is kind of slim. One suspects that the occupants may end up being single low income homeless veterans or homeless veterans with small families.

Good for Maricopa and good for Catholic Charities, but our nation has a long way to go before it owns up to its responsibility for housing homeless veterans.

A member of the Santa Monica City Council took President Obama to task in the pages of the Los Angeles Times on this very subject. Bobby Shriver cited President Obama’s 2012 opening campaign statement that “Nobody who serves, nobody who fights for this country should have to fight for a job or a roof over their heads when they come back home.” Shriver acidly observed, “That claim may work elsewhere, but not in L.A., Mr. President.”

Los Angeles is only part of the story. The Department of Housing and Urban Development and the Veterans Administration count approximately 67,000 homeless veterans. An average of 18 veterans commit suicide every day in the U.S., and the suicide rates are highest among young veterans aged 17 to 24. It is not unreasonable to speculate that at least some of these suicides are related to homelessness.

With repeated reports of disarray within the Veterans Administration, the president’s delivery on his campaign pledge has been pretty thin. Responding to the housing needs of the veterans and their families who are already here—and the tens of thousands who are slated to return from deployments in Afghanistan and Iraq in the next several months—seems to be an obvious issue for public-private partnerships of nonprofits, banks, and the government.

Shriver excoriates the White House for opposing the court case brought by the American Civil Liberties Union and Harvard professor Lawrence Tribe, a case built upon the argument that the Veterans Administration has an affirmative obligation to provide adequate housing and mental health services to homeless veterans. Then, Shriver concluded with another quote from President Obama’s campaign applause lines: “This country will care for our veterans and serve our veterans as well as they’ve served us,” the president said, but Shriver added, “Fine words. But the time for words has passed. It’s time for action.”—Rick Cohen