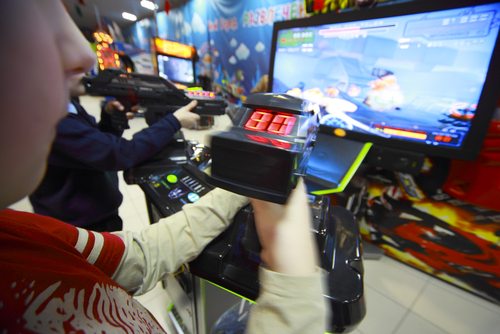 Was Adam Lanza, Jared Lee Loughner, or James Eagan Holmes driven to pick up military style weapons and kill innocent people due to exposure to video games? Does playing “Grand Theft Auto” or “Call of Duty” potentially turn gamers into real life shooters? As an alternative to gun regulation, the National Rifle Association has pointed to violent media as a contributing factor in these mass murders. Now that concern has evolved into potential legislation.

In Connecticut, State Sen. Toni Harp (D-West Haven) has proposed to “ban minors from playing arcade games that use anything resembling a firearm.” The specific language of Harp’s law would “make it illegal for the ‘owner or operator of any public establishment or amusement arcade [to] allow any individual less than eighteen years of age to operate a violent point-and-shoot videogame on the premises of such establishment or arcade.’”

Has Harp taken a look at video gaming lately? There isn’t much of it conducted in arcades. Most gamers seem to be playing on home consoles or PCs. Oddly enough, in Newtown, where the horrific shootings occurred at the Sandy Hook Elementary School, some parents decided that what was needed to help the families and the community heal was a gaming arcade. Two parents established the nonprofit Sandy Hook Arcade Center, which will begin by offering 22 games including pinball, air hockey, and foosball. Supported by donations and by fees charged to out-of-towners, the Sandy Hook Arcade Center will be free to Newtown residents. According to founders Andrew Clure and Scott Cicciari, “all the games will be family/kid friendly.”

But wait! The arcade will also offer Pac-Man Battle Royale, which lacks point-and-shoot qualities, but features battles between hungry little piranha-like circles. Arcades are pretty much things of the past, though the Sandy Hook Arcade Center exists because of a desire of the two founders and others to find some venue and some activity to bring the community’s parents and kids together. Whether the games are point-and-shoot or something else, where is the research to show that there’s a connection between violent video games and these alleged mass murderers? President Barack Obama recently called for more research in this area, but doesn’t proposed legislation on video games and arcade games distract lawmakers from what is really needed? Wouldn’t a ban on military-style assault weapons, limitations on ammunition clips, and comprehensive background checks be more effective?—Rick Cohen