W.Va. Vista Volunteers to Be Lost in Sequestration 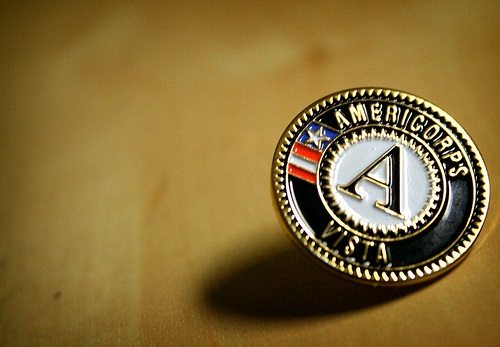 The Volunteers in Service to America (VISTA) program is different than all of the other national service programs under the AmeriCorps umbrella because VISTA is specifically and exclusively focused on fighting poverty. Created in 1965 as part of the War on Poverty, VISTA long predates AmeriCorps, but it is being severely impacted by the budget sequester. Workers in the VISTA program know that they are being hit by sequestration cuts, but for how long, and with what impacts, they don’t know. West Virginia Public Broadcasting reports that VISTA workers say they “have been given few details and remain in limbo as to what happens after the end of the fiscal year.”

Due to the sequester, at least through the end of the fiscal year, West Virginia’s VISTA program is shut down. That means, according to West Virginia Public Broadcasting, “no new VISTAs may start service in the state, and no VISTA whose terms ends will be allowed to renew for another year of service in the state.” A VISTA project director in the state, Gibbs Kinderman, predicted, “Projects that are sponsored by larger organizations may make it through where the VISTA input is a small percentage of the total effort,” but for the projects of smaller nonprofits, those efforts will come to a “shuttering halt.”

Across the nation, VISTA is not going to fill 587 slots that will come up for renewal. West Virginia’s share is estimated to be about 50 lost VISTA positions, close to ten percent of the nation’s total. It may be that the Mountain State has had more VISTA participants than others because of the long history of poverty in the state’s Appalachian region, but the result is that a small state will lose a disproportionate share of the nation’s VISTA positions. Demonstrating a less than transparent approach to the sequester, the state director of VISTA declined to speak to the press and referred questions to the national headquarters of the Corporation for National and Community Service (CNCS). In turn, CNCS reportedly declined to provide someone for a recorded interview with West Virginia Public Broadcasting.

It is a sequester story that is repeated around the nation. Those delivering programs know that a cut mandated by the sequester is coming, but no one is all that sure about how the cut will be applied. No one knows who’s really making the decisions about what to cut and what not to cut.  Program participants and staff simply wait for new announcements of delays and hope that things will get clearer over time. Neither side of the budget battle in Washington thought the other would call their bluff, so the preparations for how to communicate the cuts and how to implement them seem to have been haphazard rather than well thought out. How sad for the communities of West Virginia that will lose their access to a VISTA member between now and the end of September, and perhaps beyond that time if Congress doesn’t take action. —Rick Cohen