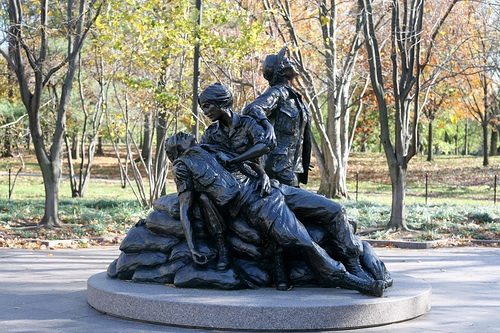 One of the saddest news reports this past holiday weekend had to have been Lizzie Warren’s story in Salon about homeless women veterans. Based on a documentary she produced, Warren writes that, “while the problem among male veterans has dropped, homelessness among women veterans has risen sharply.” Warren described women veterans as “the fastest growing homeless population in the nation.”

Part of Warren’s story examines a proposed transitional housing facility for women veterans, a 15-bed facility in Connecticut that took four years to get developed against the opposition of neighbors in several towns. Earlier this month, the Home for the Brave Foundation gave up its plan to build a transitional facility for homeless women veterans in Delaware. As reported in the Delaware press, “In testifying against it, neighbors said the area was not served by public transportation or near any stores, and they worried the home’s presence would lower their own property values. Some said they also would be concerned about having their children play outside near the home.” The story of the Connecticut facility has been well documented in the press, including the story of its final approval.

Warren notes that women are 14 percent of active duty service members and 20 percent of the National Guard, but when they return from the military, “[w]omen veterans face a dense constellation of issues: low wages, a lack of childcare and family housing options, inadequate gender-specific services at the Veterans Administration and Post Traumatic Stress Disorder from combat and Military Sexual Trauma.” She quotes Cynthia Enloe of Clark University, who says, “You come out of the Afghan or Iraqi war, as an American woman veteran, at a time when the housing market is terrible, the banks don’t trust you, and it’s hard to get a job, and you’ve experienced mental health issues as a result of what happened you in the military…It’s not any wonder that there so many women veterans now who are really suffering the loss of housing.”

Is this a problem peculiar to women veterans, in that it reflects how services for veterans are designed for men? Or does it reflect something deeper: a gap between this Memorial Day’s frequent statements of support for “our military heroes” and the lack of direct involvement of most Americans with today’s military. Since the end of the draft after the Vietnam War, the nation’s reliance on a volunteer military has meant that the percentage of the American public that has served on active duty has been low and dropping. As the chart below demonstrates, about 9 percent of Americans served in World War II, 2 percent in Korea, and somewhat less during the Vietnam War, but that dropped to 0.8 percent during the 1990-1991 Gulf War and around 0.5 percent since 9/11. 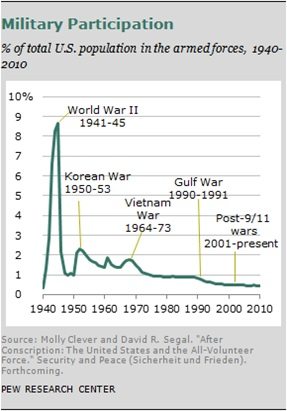 A Pew research survey of more than 1,800 post-9/11 veterans indicates that 44 percent say that they have had trouble readjusting to civilian life. Perhaps as a result of the decreased personal involvement of Americans with the military, 84 percent of modern-era veterans say “that the American public has little or no understanding of the problems that those in the military face,” according to Pew. The challenges for nonprofits serving homeless women veterans may start with the likelihood that few of us know women veterans in the first place.—Rick Cohen