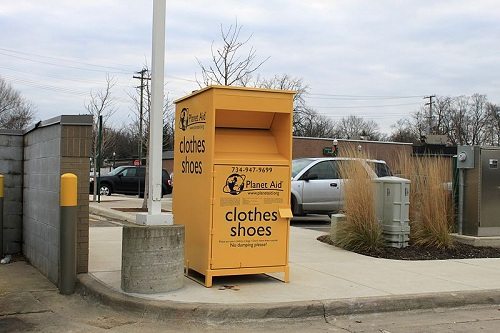 In light of last week’s NPQ Newswire coverage of a controversy concerning used clothing bins in California, we take note of the decision of the selectmen of Ludlow, a small city in Western Massachusetts, to waive the $50 fee normally required of organizations that place used clothing bins in public places. Planet Aid asked that the fee be waived because of its nonprofit status.

Ludlow’s selectmen debated whether clothing bins became fire hazards or otherwise appeared unkempt. Some suggested that the $50 reflected a reasonable charge for the regulation of clothing bins. Planet Aid’s finances, if its most recent Form 990 is indicative, show that $50 wouldn’t be much of a hit. In 2010, it had $35.9 million in revenues; in 2011, $37.3 million.

Planet Aid is hardly a tiny operation. Its national headquarters claims 540 employees, though presumably local Planet Aid operations might have more staff and additional volunteers. The Springfield Republican noted that Planet Aid has 18,000 clothing bins nationally and 2,300 in Massachusetts, Connecticut, and Rhode Island. By the reporting of the Republican, there was no debate among the selectmen concerning what Planet Aid does with the money it generates from donations of used clothing and shoes, nor any issues regarding its overall nonprofit accountability.

There are more than nonprofits engaged in what NorthJersey.com columnist Holly Stewart describes as a big business in used clothing, with questions about who benefits from the donations and their impacts on various sectors of the economy. Whether it is used clothing behemoths like Goodwill Industries and the Salvation Army, lesser-known but still large international groups such as Planet Aid, or even for-profit groups, this is a sector that merits more public debate among nonprofits.—Rick Cohen