What Ails Rural Philanthropy and What Must Be Done 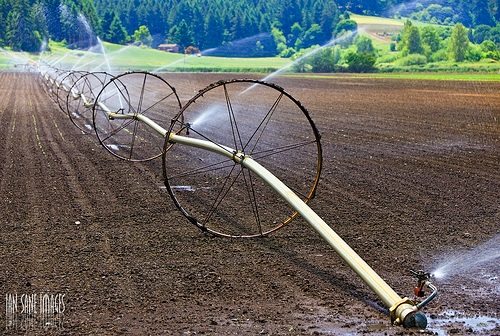 In the USDA’s Rural America at a Glance, a compilation of social and economic indicators about conditions in rural America that was issued just last month, there’s a map on job growth that’s telling: It shows that rural areas are far behind metro counties in their recovery from the depths of the recession and the gap continues to grow. 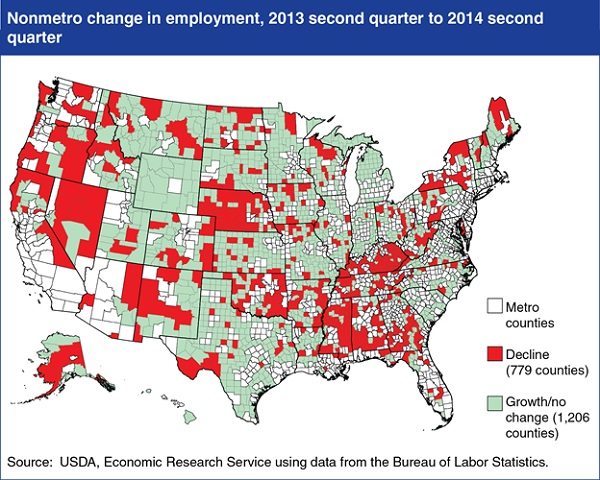 Rural employment growth would have lagged further if it weren’t for the job growth in the 114 rural counties where oil and gas extraction more than doubled between 2000 and 2011.

The report includes a number of other social and economic indicators, but one big one is missing: the inflows and outflows of charitable dollars in rural America. There have been many efforts over the years since the fruitless challenge of then-senator Max Baucus (D-MT) to get the foundations that make grants to rural America to double their grantmaking in five years. As with many other efforts to nudge charity and philanthropy toward greater focus on social goals, Baucus’s initiative, without the use of his power on the Senate Finance Committee, accomplished nothing other than a couple of rural philanthropy conferences and a glossy book distributed by the Council on Foundations.

What has happened to rural philanthropy? With scant resources and weak data, we have been doing our best to examine slices of philanthropic support for rural America, beyond what might be grantmaking to entities in nonmetropolitan areas that don’t actually use the funding for anything particularly rural—other than themselves.

In 2004, in a report called Beyond City Limits, we documented what looked like a philanthropic spending level of less than one percent dedicated to rural community and economic development. Some years later, that report was followed by another on Rural Philanthropy, drawing on focus groups in rural areas of California, New Mexico, Florida, Kentucky, Montana, Mississippi, and Texas, revealing how nonprofits in these areas were struggling with a lack of both local and national philanthropic support. In 2011, we at NPQ documented a decrease of 3.45 percent in rural development granting, despite a huge 43.4 percent increase in overall foundation grants between 2004 and 2008. In 2013, we looked at foundation grantmaking to the top 67 rural CDCs as reflected in their prominent as grantees of Rural LISC or identities as Rural NeighborWorks groups, and found that when PRIs and other non-grant assistance was removed from the calculations, these top-notch groups had seen sizable decreases in their foundation support in 2010 and 2011. For 93 Rural LISC and NeighborWorks groups, their non-governmental support between 2009 and 2011 dropped 12.6 percent.

Summarizing other reporting we have done on rural philanthropy comes out roughly the same, a picture showing that the philanthropic resources devoted to rural America have not kept up with the moneys flowing to metropolitan and suburban locales. No one should think that philanthropy is doing a bang-up job in urban areas either when it comes to issues of community development, poverty, and affordable housing, but the data, even if limited, make it clear that, just like in job creation, rural is falling behind in its access to philanthropic grants.

With these statistics, one might think that there might be a national crisis concerning institutional philanthropy’s bypassing of the social, economic, and housing needs of rural America. At a rural philanthropy conference sponsored by the Council on Foundations in 2011, the USDA signed a memorandum of understanding with the Council, whose purpose Agriculture described as, “to provide new sources of capital, new job opportunities, workforce investment strategies, and identification of additional resources that can be used to spur economic growth in rural America.” It isn’t clear exactly what ensued between the USDA and the foundations’ trade association to implement the MOU they signed, perhaps because the results might not have shown much of an increase in philanthropic giving to rural, but Secretary Vilsack this past July created a “foundation” within the department, the Foundation for Food and Agricultural Research, a 501(c)(3) public charity to seek and accept private donations, both individual and foundation, to fund research of national significance. It does not appear that either the USDA or the Council on Foundations has conducted any sort of assessment of the cooperative venture to determine if philanthropy did generate new sources of capital for rural economic development.

In the meantime, the National Rural Funders Collaborative has shut down. An assessment report about the NRFC experience published in 2012 was a dispiriting read, with its conclusions that conveyed a hope for regional and issue-based collaborations to succeed the national program, the likelihood that future rural funders will fund more narrowly than their predecessors, and that funders might put particular emphasis on the development of community philanthropy in rural areas. In both the NRFC analysis and in other reports, including a report by the Points of Light Foundation and the Volunteer Center National Network, an emerging emphasis played to rural self-reliance and called for increased attention to volunteerism in addition to—or subtly in place of—turning to philanthropic support, even though the case studies highlighted by Points of Light were clearly connected to foundations: a healthcare access project in Abingdon, Virginia, that benefitted from support from the Virginia Healthcare Foundation, and Cass Lake’s effort for comprehensive community revitalization getting support from one of the Minnesota Initiative Foundations through the foundation’s Healthy Communities Program. The notion that volunteerism replaces philanthropy in modern life is a pleasant and seductive trope used by both government and foundations in their mythification of rural America’s self-help, mutual aid tradition, but it’s a non-starter about real life. Rural communities and rural nonprofits need resources and cannot be expected to compete based on assumptions that rural people simply volunteer for each other, work for significantly less pay when they are employed to do community work, and carry out multiple jobs when comparable organizations in metropolitan areas are permitted, encouraged, and funded to recruit people to do one job at a time.

In 2011, the Appalachian Regional Commission allocated $1 million to support community philanthropy in Eastern Kentucky which it then followed with a March 2012 “consultation” on what might be done to vault community philanthropy. After repeating the much-cited research about the impending intergenerational transfer of wealth that could be captured for rural philanthropy, the consultation called for the collection and dissemination of examples of effective partnerships between development organizations and community foundations, the identification of models for collaborative funding, building the capacity of community foundations, building relationships between community foundations and local development districts, and developing metrics to measure community foundations’ impact. Raising new money for regional funds attached to community foundations is another positive concept, indicative of the bootstrapping image of many rural communities, but remarkably slow and hardly likely to provide capital comparable to the kind of grantmaking from a foundation like Z. Smith Reynolds, which created and funded the MAY Coalition to promote business development and provide loans for entrepreneurs in Mitchell, Avery, and Yancey counties in North Carolina, to cite one example. The Coalition is a certified Community Development Financial Institution and provides loans as high as $250,000, hardly likely for a community foundation trying to endow a new regional fund.

Neither the ARC nor the USDA have taken aim at the nearly $1 trillion in foundation endowments to ask, much less influence, why more of that isn’t flowing into rural communities and rural nonprofits. It is an unavoidable issue; if the question is philanthropic assets devoted to rural development, indigenous assets captured through a rural piece of the intergenerational transfer of wealth are important to go after, but their accumulation will be slow and tedious, and if devoted to endowments, generating only a five percent actual expenditure toward rural causes. Rural philanthropy needs the big foundations to weigh in and put concentrated resources into domestic rural programs. However, despite all the discussion of rural philanthropy during the past decade, as documented above, the philanthropic trend seems to be going against rural.

Ultimately, the need is for philanthropic advocacy, but nonprofits tend to be next to petrified about the notion of organizing about philanthropy and about linking that organization with public policy. Even the nation’s strongest philanthropic advocates have receded in their willingness to pursue advocacy in the public arena concerning philanthropy. Somehow, for every aspect of society, nonprofits are willing to challenge, organize, and advocate, but when it comes to foundations, the presumption of foundations’ being on the side of the angels gives them a shield no other sector gets. Unless and until rural communities are going to be satisfied with demonstration grants, foundation conferences, and glossy books, rural philanthropy doesn’t have good prospects of increasing in the future.