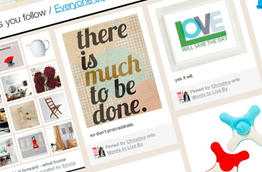 February 21, 2012; Source: Huffington Post | There are many ways to share your images through social media, but photo sharing site Pinterest has brought something new to the table and is also becoming a useful tool for nonprofits and foundations.

Pinterest serves as a virtual bulletin board for users to “pin” images based on various topics and interests. The site launched last summer and has reportedly hit the 10 million unique monthly U.S. visitors mark faster than any other standalone site in history.

Huffington Post remarks on how Pinterest takes the social media conversation fueled by sites such Facebook, Twitter and MySpace from “look at me” to “look at this,” thereby delivering an “untapped space for inspiration, creativity and action.” This simple modification in the focus of image sharing could make Pinterest a great tool for organizations looking to motivate others to tell their story through imagery.

Huffington Post highlighted seven nonprofits that are successfully using Pinterest, which could serve as a good template for how organizations can gain a significant following and benefit from the site:

Pinterest can also help organizations see what other images their followers are interested in, perhaps enabling them to better understand and cater to their audience. In Pinterest’s case, that audience is predominantly female.

New data released in January 2012 shows that Pinterest now drives more referral traffic than Google+, YouTube, and LinkedIn combined—so this new platform will seemingly be vital to your nonprofit. The Nonprofit Tech 2.0 blog has provided an insightful step-by-step tutorial for new Pinterest users, a good resource for nonprofits interested in getting into the Pinterest scene. –Aine Creedon