Who Gave What to the Second Obama Inauguration? We Don’t Know 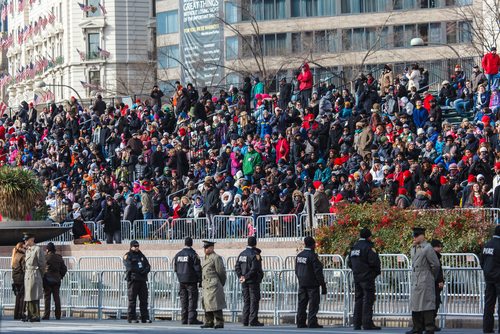 The 2013 inauguration website features a very odd list of the names of individuals, corporations, and labor unions that contributed to the costs of the president’s inauguration. Four years ago, President Barack Obama’s inauguration team also posted a list, but it was different in one significant way: it contained the names of donors and the amounts they contributed. This time, it’s only a list of names. No amounts.

Scrolling down the list, after Elissa Banas and before Hannah Banks you’ll find a donor named “Bank of America.” After Brittany Astrup and before Kenneth Atchity is a donor by the name of “AT&T, Inc.” And so on.

If this is an attempt at transparency for the corporate philanthropy paying for the president’s second inaugural, it is pretty inadequate. Scrolling through long list of alphabetized names that should have been grouped as individual donors, corporate donors, and labor union donors—with amounts, of course—leads to the likelihood of failing to spot some donors, but our review also found corporations such as Coca-Cola, Microsoft, Genentech, and FedEx. Of course, the long list of individual names undoubtedly contains corporate titans and hedge fund owners contributing as individuals rather than running their donations through their official corporate structures.

This year’s list of corporate philanthropy to pay for the official inauguration differed from the 2009 version in other ways, too. There were no donor zip codes listed this time around. In 2009, the inauguration committee capped donations at $50,000, but this year, we did not find any clearly specified limit as to the size of donations. The inauguration committee made the elimination of the old cap crystal clear when it solicited donations of as much as $1 million from corporations via the so-called “Washington” level packages that promised donors four tickets to one of the two official inaugural balls, inauguration parade bleacher seats, an invitation to a VIP reception, and access to a “road ahead” briefing by members of the president’s financial team, among other perks. If a corporation gave only at the $500,000 “Adams” level, the donor had to forego the parade bleacher seats and two of the tickets to the inaugural balls.

Why mention the corporate donors to last week’s presidential inauguration? A couple of reasons. With no cap on donations, we suspect that the Presidential Inauguration Committee might have had a surplus of donations. If so, what will happen to the unused funds? Also, compared to the president’s first inauguration, this one allowed for big money with pathetically weak disclosure standards. For an administration that has described itself as wanting to be the most open administration in history, the disclosure of inauguration dollars is not a step forward in the history of presidential transparency. —Rick Cohen