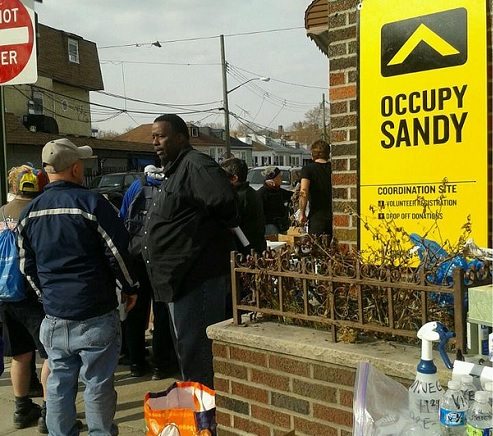 ProPublica and NPR have been doing an investigative series on the Red Cross focusing on its performance during Superstorm Sandy as well as other issues like possible misrepresentation to donors of the organization’s fundraising and overhead costs. The reporters are openly inviting people to help them with their “Red Cross Reporting.” (It is worth saying that reporting on the basis of anonymous sources, as is done in this article, is often a difficult sell, but in this case, there is corroboration in documents and in interviews with named individuals who worked with both the Red Cross and Occupy Sandy.)

In the most recent installment, the investigation returns to the Sandy response. In the wake of Superstorm Sandy and in the midst of a relief effort that was not only spotty but slow, a loose coalition calling itself Occupy Sandy stepped in quickly to seek out survivors and provide badly needed services. In a report entitled “The Resilient Social Network,” the group was described as follows:

“Within hours of Sandy’s landfall, members from the Occupy Wall Street movement—a planned social movement comprised of social activists who protested income inequality in the United States—used social media to tap the wider Occupy network for volunteers and aid. Overnight, a volunteer army of young, educated, tech-savvy individuals with time and a desire to help others emerged. In the days, weeks, and months that followed, “Occupy Sandy” became one of the leading humanitarian groups providing relief to survivors across New York City and New Jersey. At its peak, it had grown to an estimated 60,000 volunteers—more than four times the number deployed by the American Red Cross.

“Unlike traditional disaster response organizations, there were no appointed leaders, no bureaucracy, no regulations to follow, no pre-defined mission, charter, or strategic plan.

“There was just relief.”

So senior staff at the Red Cross told other ARC staffers not to work with Occupy Sandy. “We were told not to interact with Occupy,” said one staffer even though Occupy Sandy had, according to a volunteer, what ARC did not: minute-by-minute information.

ProPublica writes that three staffers spoke with their reporters on the condition of anonymity because they continue to work with the Red Cross. And in fact, in the previously mentioned report which was produced by the Department of Homeland Security a Red Cross chief of volunteer coordination “he was told not to work with Occupy Sandy because of the affiliation with [Occupy Wall Street].”

Here is how ProPublica reports the dynamic,

“Fred Leahy, a veteran Red Cross responder who was a Community Partnerships Manager in Sandy’s aftermath, recalled a meeting a week after the storm in which he and two other officials, one from Washington, discussed ‘the political and donor ramifications of associating with Occupy Sandy due to its outgrowth from Occupy Wall Street.’ He says the meeting was called after an inquiry from Red Cross CEO Gail McGovern.

“Red Cross responders says that many staffers and volunteers objected to the charity’s stance on Occupy Sandy because among the Red Cross’ fundamental principles is that aid must be delivered without regard to politics or ideology. ‘We are a neutral, humanitarian organization,” one staffer says. “We don’t take sides.’”

Still, some tried to work with Occupy behind the scenes, keeping a separate list of contacts so that their working relationship would not be seen by ARC higher ups. “I have no doubt we could have had a much more productive relationship with the Red Cross if they’d been willing to associate themselves with us out in the open,” Kleinman says. “I have no doubt their failure to look past politics hurt the overall recovery.”

Occupy minutes record a confusing relationship, including one incident in which “two Red Cross employees showed up at an Occupy site in Brooklyn ‘asking if [Occupy] could send [the Red Cross] volunteers—and their stipulations for that: they couldn’t wear any Occupy stuff.’ Those conditions were rejected.”—Ruth McCambridge