Why Does Limbaugh Think Nonprofit Workers “Score Like Bandits?” 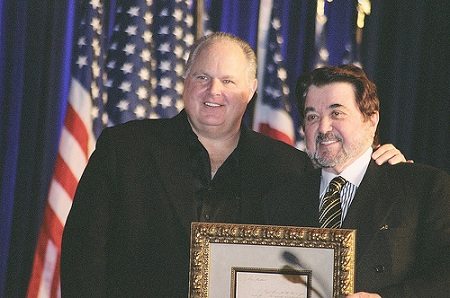 Rush Limbaugh publishes lists of his favorite quotations under the heading, “Pearls of Wisdom.” In the Wednesday edition of his pearls, he makes this assertion about nonprofits:

“There really is no such thing as a nonprofit. All a nonprofit is, is an organization that claims on its books at the end of every year that it didn’t make any money. But the people that work at nonprofits score like bandits. I would think if they’re gonna be honest, a nonprofit, nobody should make anything. They should be reimbursed for the expenses involved, and that’s it.”

Shall we endeavor to provide Limbaugh with some factual information? Or shall we run a contest of how many errors there are in this brief tutorial on nonprofits? The NPQ Newswire has stumbled across previous pearls on nonprofits and charities from Limbaugh, but this new one made us wonder: why does Limbaugh think this?

Here’s one hypothesis. Limbaugh has been involved with a nonprofit. Like Glenn Beck, Limbaugh was paid by the Tea Party-supporting nonprofit FreedomWorks to say nice things about the organization with the hope that his comments would result in donations. According to the FreedomWorks winter board report, payments to Limbaugh led to $433,484 in donations in 2012. Is FreedomWorks the nonprofit from which Limbaugh gets his distinctive understanding of the nonprofit sector?

If so, he’s learning lessons that might not apply to most nonprofits, such as the idea that nonprofit leaders tend to rake in the big bucks, as one might come away thinking after looking at the salaries paid to FreedomWorks founder Dick Armey ($250,000 for 21 hours a week) and executive director Matt Kibbe (over $300,000 from FreedomWorks and related organizations) in 2010. He’s also perhaps learned about the atypical plan to have FreedomWorks board member Richard J. Stephenson pay Armey $400,000 a year for 20 years in return for not bolting from FreedomWorks before the November elections.

If FreedomWorks is Limbaugh’s frame of reference for the nonprofit sector, no wonder he thinks people at nonprofits “score like bandits.” The board report doesn’t identify how much he was reportedly paid to offer bon mots to FreedomWorks on his radio show, but Limbaugh has also scored with other nonprofits. For example, the Heritage Foundation reportedly pays Limbaugh approximately $2 million to sponsor his radio show. If there is one person who has really scored like a bandit from his association with nonprofits, it’s Rush Limbaugh.—Rick Cohen