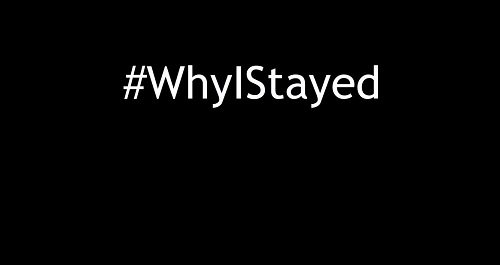 This week started off with a shocking video released by TMZ that showed professional football player Ray Rice in the act of assaulting his fiancée (now wife) in an elevator, escalating the scandal at the NFL and spurring Rice’s team, the Baltimore Ravens, to drop him. As the story has developed, Rice’s wife, Janay, has stood by her husband’s side. In late May, after casino footage showing the scene preceding and following the assault hit the media, Janay apologized in a press conference for what she said was “her role in that night.” She struck out at the media, some of whom somehow still assign her blame in being attacked, on her Instagram on Tuesday, saying, “to take something away from the man I love that he has worked his ass [off] for all his life just to gain ratings is horrific.” These statements in defense of Rice have left some spectators baffled, though experts describe her reaction as “not unusual” for those subjected to abuse.

What has emerged from this ruckus is an empowering conversation on Twitter and throughout social media highlighting the complexities of domestic abuse and raising awareness on how prevalent abusive relationships are in our society.

Author Beverly Gooden initiated the #WhyIStayed hashtag on Twitter, explaining that she saw a version of herself in Janay Rice’s situation:

I tried to leave the house once after an abusive episode, and he blocked me. He slept in front of the door that entire night. #WhyIStayed

I stayed because my pastor told me that God hates divorce. It didn’t cross my mind that God might hate abuse, too. #WhyIStayed

I stayed because I thought love was enough to conquer all. #WhyIStayed

The #WhyIStayed hashtag ignited a new powerful conversation that quickly caught fire, allowing women who had personal experiences with domestic abuse to bravely speak out. Gooden explains, “I believe in storytelling. I believe in the power of shared experience. I believe that we find strength in community. That is why I created this hashtag. I hope those tweeting using #WhyIStayed find a voice, find love, find compassion, and find hope.”

The trending hashtag has given a voice to many women who felt powerless against abusers in families and relationships—past and present. Below is a taste of the important conversation developing through the trending hashtags #WhyIStayed and #WhyILeft:

I was determined to make it work, wanted kids to have their dad, convinced myself that what he did to me wasn’t affecting them #WhyIStayed

Because he made me believe no one else would understand. #WhyIStayed

I felt shame being a single mother. #whyistayed I felt worse knowing my daughter saw him hit me #whyileft

I was manipulated into thinking everything he did to me was right; even with the gut feelings saying it wasn’t right. #WhyIStayed

It’s incredible to see so many women speak out on such private and shameful moments in their lives, which helps empower other women to do the same. By giving women a platform to voice their experiences, we can shine a new light on the underlying issues that affect domestic violence. The media frenzy around the Ray Rice scandal has taken off and raised some important questions, but the conversation through social media has truly been transformed by these hashtags and created a dynamic perspective on the issue of domestic abuse.—Aine Creedon

Disclaimer: Since this article is about people freely expressing their opinions we have allowed comments that may be deeply offensive for some (including us).