Will Garland Get the Opportunity to be Borked? 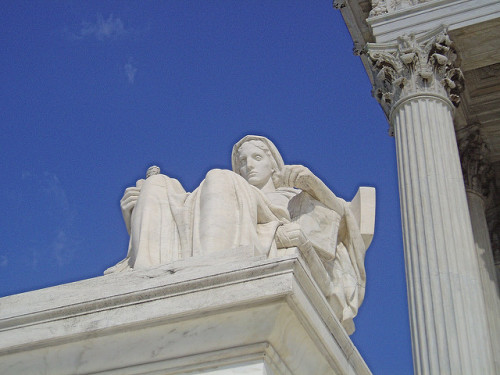 President Obama announced Wednesday morning that he intends to nominate Merrick Garland, the Chief Judge for the U.S. Court of Appeals for the District of Columbia, to serve as a justice on the U.S. Supreme Court. If confirmed, Garland would succeed Antonin Scalia, who passed away last month after 38 years in office.

Normally, stories like this would follow a prescribed pattern, listing qualifications, quoting ardent supporters and cautious opponents speculating on the upcoming confirmation hearings. (One interesting factoid is that Garland’s nomination will continue the Court’s religious composition as exclusively Catholic and Jewish, since the Jewish Garland would succeed the Catholic Scalia. The most recent Protestant on the Court, John Paul Stevens, retired in 2010.) But 2016 isn’t a typical year.

As NPQ wrote after Scalia’s death, Republicans are refusing to even hold hearings on a nominee until the next President takes office in early 2017. They are now referring to the “Biden rule,” after a 1992 Senate floor speech by then-Sen. Joseph Biden (D-DE), who advocated for delaying any Supreme Court appointments during the final year of the George H.W. Bush Presidency until after the 1992 elections, when Bill Clinton was elected.

Early issue-based opposition to Garland appears to center on his position on Second Amendment rights and, in particular, his actions on the appeals court relating to the Heller decision overturning Washington, D.C.’s restrictions on gun ownership by residents. The conservative Judicial Crisis Network has already announced plans to spend at least $2 million opposing Garland.

Early issue-based supporters include Cecile Richards of Planned Parenthood and NARAL Pro-Choice America president Ilyse Hogue. After meetings she attended at the White House the day the nomination was announced, Richards issued a statement supporting Garland’s receiving a hearing by the Senate.

Justice Scalia’s successor has the potential to change the Court’s precarious and undependable 5-4 conservative majority into a much-more-dependable 5-4 liberal majority. This would place a host of issues important to nonprofits and civil society in play for the Court, from the Affordable Care Act (there are still challenges working their way through the courts) to union organizing, campaign finance, immigration, university admissions policies, and voter/voting qualifications. As long as the Court maintains a 4-4 split on key cases, those decisions will be delayed or lower court decisions (sometimes contradicting each other) will remain in force.

However, there may be some weakening on that strong GOP opposition. NPR is reporting that some Senate Republicans have signaled to the White House that they would be willing to consider Garland’s nomination after the November elections if a Democrat is elected President. Sen. Orrin Hatch (R-UT) is one who mentioned that possibility. The reasoning is that Garland, while not what Republicans and conservatives want on the Court as Scalia’s successor, he would be more palatable than a nomination made by a President Sanders or a President Hillary Clinton. Also, there is the possibility that the GOP could lose its majority in the U.S. Senate, making a more liberal nominee from a Democratic president easier to confirm.

The remaining question is whether Garland would be approved by the Senate even if given a hearing. There appears to be no question of Garland’s judicial qualifications. He has a reputation for collegiality and a passionate belief that all opinions and viewpoints should be heard in judicial arguments. In decades past, this would have all but assured him of confirmation. However, the Senate departed from this history in 1987 when Ronald Reagan nominated Robert Bork to the Supreme Court. Bork had served as Solicitor General under Richard Nixon and as a judge on the U.S. Court of Appeals for the District of Columbia. Democratic opposition to his nomination led to a months-long passionate partisan battle and ultimate 58-42 defeat in a divided Senate. The verb “to Bork,” or “borking,” was coined not long thereafter and used, for example, by opponents to Clarence Thomas’s nomination to describe the tactics they would employ to fight Thomas and his supporters.

With so much in politics and government being volatile and unpredictable in 2016, it’s no surprise that a Supreme Court nomination would follow the pattern. Will Merrick Garland get a hearing? If so, with today’s announcements as a guide, he will likely be “borked” based on representations and misrepresentations of his judicial philosophy and character for partisan political advantage. Lobbying groups and media firms on both sides of politics will make a lot of money, but the public will be none the wiser and government won’t function any better.—Michael Wyland