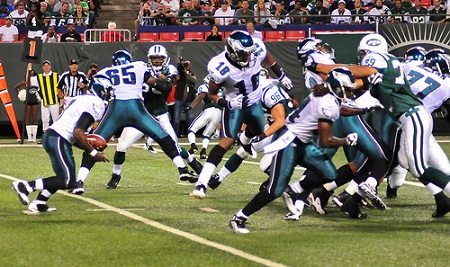 The NFL is now acting serious about concussions for current players and for young players in college on down to Pop Warner leagues, advocating for Lystedt Laws, which are the state statutes, active in 34 states, requiring the removal of any young athlete from a game if he or she shows signs of concussion. The laws also prevent the return of the player until he or she has been evaluated and approved by a licensed health professional. That’s a welcome sign to all those concerned with football players’ health, but what about the legions of retired professional players who have already suffered lifetimes of “having their bell rung” on the gridiron? More than 5,400 former players, spouses, and players’ widows are suing the NFL for its alleged failure to provide proper care and protection for players, arguing that players have suffered significant health impacts with meager compensation.

Paul Anderson, a Missouri-based lawyer who keeps track of the NFL concussion litigation at nflconcussionlitigation.com, says that 30 percent of all former NFL players have filed a concussion-related lawsuit. Anderson notes that the NFL made a $30 million contribution to the National Institutes of Health to study neurological diseases, perhaps stimulated by a report from the American Academy of Neurology that five-year NFL players are “three times more likely to die from a neurological disease when compared to the general population.” Anderson says, “the NFL is trying to regain its image in the court of public opinion after taking several hits following the string of suicides; former players saying they won’t let their children play; and even worse, that the NFL’s about-face is insincere — primarily triggered by lawsuits.”

The extraordinarily wealthy NFL hasn’t exactly been generous to veteran players and their families over the years. In fact, retired players lost a class action case against the NFL for general support when the courts ruled that “the NFL owes retired players nothing beyond what they had negotiated when they were playing.” These new concussion-related lawsuits identify a specific responsibility that plaintiffs argue the NFL should have had in regard to the health and well being of players. The NFL has moved to have the cases dismissed and to have claims resolved under the collective bargaining agreement with current players.

Remember that the NFL is a tax-exempt 501(c)(6) business trade association—and, in a sweetheart deal from Congress, it is exempt from anti-trust considerations. Several NFL teams are worth more than $1 billion apiece, but the league itself keeps its net revenues low in part by compensating executives like NFL Commissioner Roger Goodell and others with millions of dollars. Compare these handsome salaries to the often destitute veteran footballers; despite the gaudy contract numbers for some stars, a small proportion of football contract money is guaranteed, and the average length of an NFL career is somewhere between 3.2 years (the number used by the NFL Players Association) and six years (the NFL’s own number). Either way, that’s not a long time to amass great wealth.

As the world’s most profitable sports league, there’s no question that the NFL could do better for former employees who are now suffering the ravages of degenerative mental diseases. Will the NFL do so, or will it adopt the credulity-straining position that the players’ football career concussions are not to blame for the higher rate of neurological problems documented in the American Academy of Neurology study? —Rick Cohen

CORRECTION: An earlier version of this article identified Paul Anderson as a Minnesota-based lawyer. He is a Missouri-based lawyer. NPQ regrets the error.