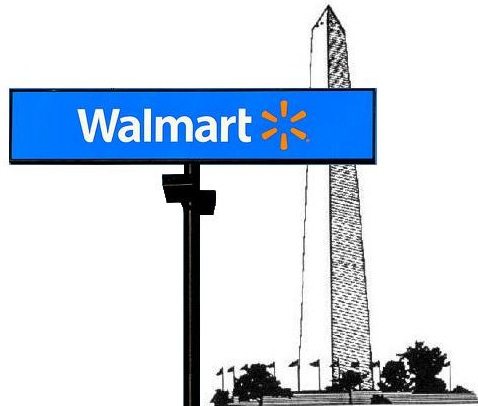 Score one for Walmart and other big box retailers that want to open up stores in D.C. but pay crummy wages. Mayor Vincent Gray vetoed the bill passed by the Washington, D.C. City Council that would have required retailers with stores of at least 75,000 square feet owned by a parent company with a minimum $1 billion in annual earnings to pay a salary to all employees of at least $12.50 an hour, without calculating in the additional value of potential benefits.

With plans for opening a couple of stores in the District, Walmart was the obvious target of the legislation. Walmart and various business groups campaigned vigorously against the bill. The Arkansas-based retailer spread lots of philanthropic grants to a variety of local charities, with the potential byproduct of winning the hearts and minds of the nonprofit grant recipients, but also issued dire warnings about pulling their investments out of the city if the bill were to be enacted.

Gray hit on several reasons for his veto:

Council President Phil Mendelson has scheduled a Council meeting to override the Mayor’s veto for September 17th. The nonprofit sector recipients of Walmart’s philanthropic largesse now have a week’s window to speak up. Among Walmart’s grant recipients, at least those with grants from the Wal-Mart Foundation, are both local activist groups and national progressive organizations. America’s Promise—The Alliance for Youth received at least $1.5 million between 2009 and 2011; the ASPIRA Association got $1.66 million in 2009; Capital Area Food Bank $100,000 (2011); D.C. Central Kitchen $285,000 between 2009 and 2011; the Food Research and Action Center, $7.4 million between 2010 and 2013; the Center for American Progress, $506,000 in 2009; Independent Sector, $25,000 in 2010; League of United Latin American Citizens, $500,000 in 2012 (plus $300,000 for LULAC’s National Education Service Centers in 2011); New America Foundation, $525,000 in 2009; Share Our Strength, $6.6 million between 2011 and 2012; Rock the Vote, $25,000 in 2009; and Women Work! The National Network for Women’s Employment, $300,000 in 2009. Will they weigh in and say that Walmart employees should get more than D.C.’s minimum wage of $8.25 an hour? The question itself raises an important issue: Under what circumstances can and should grant recipients tell a corporate donor that despite its grantmaking, they will still take a public policy position that does not support the corporation’s specific public policy interest?

Nonprofits find themselves weighing difficult issues. Are they willing to jeopardize the corporate money going into their programs by speaking out publicly against a corporation’s public policy agenda in their community? Does the fact that employment or living wage issues might be outside of their typical program scope release the nonprofit grantees from having to speak up publicly—for example, a grantee that provides food services to the poor claiming that it doesn’t take positions on employment or living wage campaigns? Is it likely that in a politicized environment that a corporate donor would pull the grants they give to charities because they have spoken out against a particular policy? Like the debate between Mayor Gray and Council President Mendelson over Walmart’s potential investment in the District, the answers aren’t easy for nonprofits to decide.—Rick Cohen