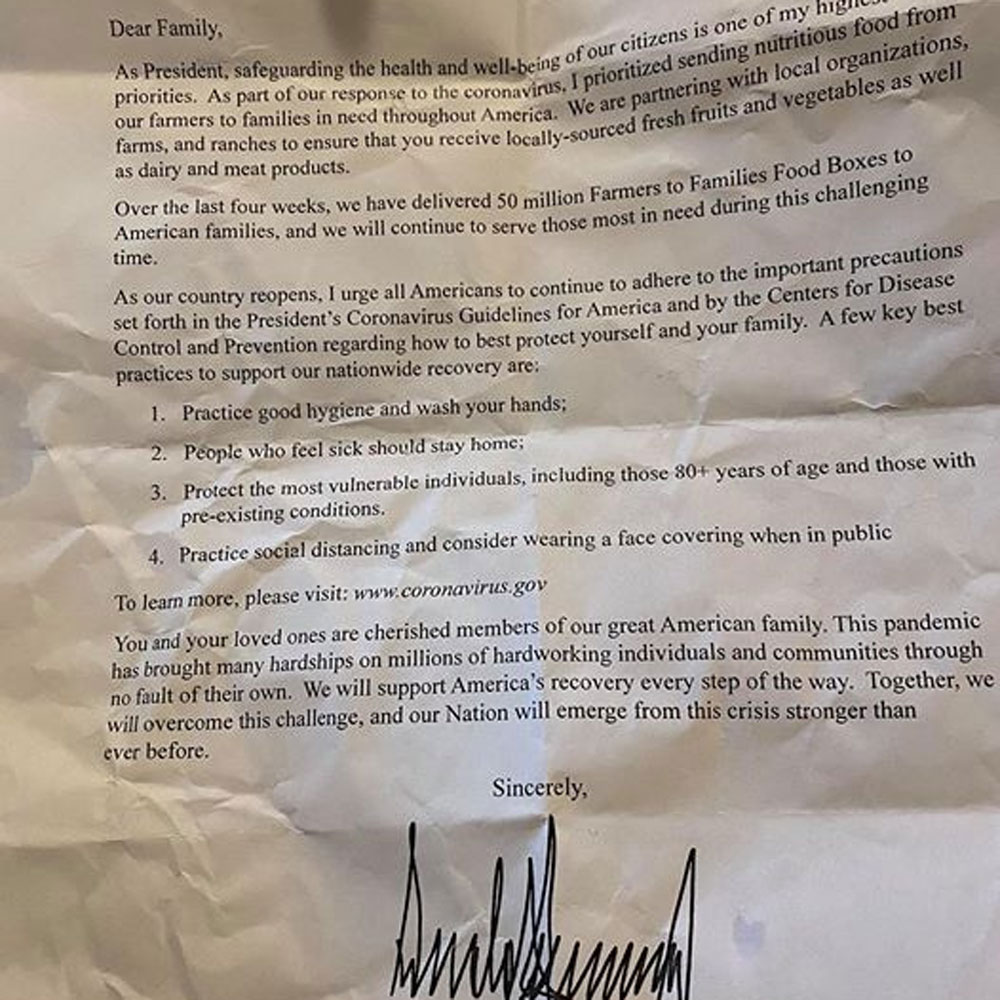 Nonprofits distributing USDA-provided food boxes in Wisconsin are crying foul regarding the insertion of a self-congratulatory letter signed by President Donald Trump on White House letterhead.

The letter assures recipients that “safeguarding the health and well-being of our citizens” is one of the president’s highest priorities. “As part of our response to the coronavirus, I prioritized sending nutritious food from our farmers to families in need of assistance.”

Some Democratic congresspeople believe the letter violates the Hatch Act. On August 14, a group of 49 House Democrats sent a letter to US Agriculture Secretary Sonny Perdue, which reads, in part:

A public health crisis is not an opportunity for the administration to promote its own political interests.

What’s more, the situation has caused consternation among the nonprofits that are part of the emergency food system in Wisconsin because it places them in the position of distributing what is essentially campaign material. Some feel obligated to notify those who receive the boxes about the letter, since they have been told that they are prohibited from removing them.

Donna Ambrose, executive director of The Neighbors’ Place in Wausau, says, “As a nonprofit, I have to fiercely defend and protect our 501c3 nonprofit status, which means we do not get into the political arena, and we do not want people to get the impression that we are advocating for a candidate, left, right, or otherwise.”

Ambrose says that many of those receiving the boxes are middle-class people who have been laid low by the pandemic economy. “These are people who were doing okay [but] were living check to check. And then the bottom fell out.”

The Trump letter, however, is only the latest problem identified with the food box program. Rep. James E. Clyburn (D-SC), the coronavirus subcommittee’s chair, wrote in an August 24, 2020, letter to Perdue:

Although Congress allocated billions of dollars to distribute food to Americans in need, I am concerned that the Trump administration’s management of this critical effort has been marred by questionable contracting practices, a lack of accountability, and a failure to deliver food to many communities that need it most. Rather than focusing on addressing these problems, the administration appears to be seeking political benefits from the program, including by inserting a letter signed by President Trump in food boxes.

Isaak Arnsdorf of ProPublica writes that Jordan Libowitz of Citizens for Responsibility and Ethics in Washington (CREW) sees the letter as being in a grey area as far as the administration is concerned, although it clearly strays further towards the line than is prudent or proper. The article points out that:

Past administrations have observed the Hatch Act with strict firewalls between campaign and official events and admonitions against officials’ making any statements or taking actions that could appear political. The Trump administration, however, has routinely flouted this law. In addition to using the White House for convention speeches by the president and first lady, Trump and other officials also conducted a naturalization ceremony and a pardon as part of the Republican National Convention, and Secretary of State Mike Pompeo delivered a speech from a diplomatic trip to Israel. White House adviser Kellyanne Conway violated the Hatch Act so many times that the independent Office of Special Counsel recommended she be fired. (She wasn’t, and said she’d leave the White House in August for family reasons.)