With Ellsberg on Board, Foundation to Collect WikiLeaks Donations 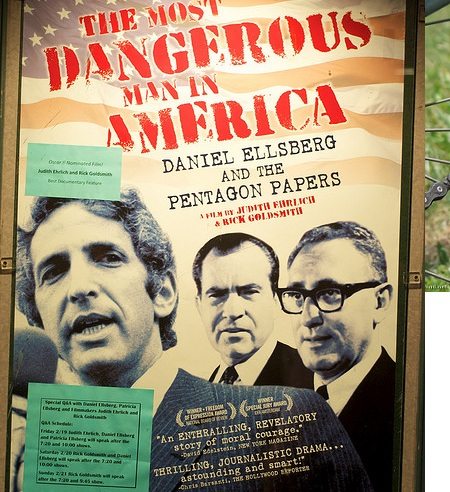 The octogenarian Daniel Ellsberg, the man behind the release of the Pentagon Papers, is on the board of the Freedom of the Press Foundation, which recently announced that it will be willing to accept online donations on behalf of WikiLeaks. A Rand Corporation military analyst 40 years ago, Ellsberg released a large secret report from the Department of Defense on decision-making in the Vietnam War to a variety of mainstream newspapers in 1971. Although Ellsberg was tried in federal court under the Espionage Act, he was freed due to the federal government’s illegal wiretapping of him and its pre-Watergate break-in at the offices of one of Ellsberg’s colleagues.

The Freedom of the Press Foundation’s move is notable in light of the 2010 decisions by Visa, MasterCard, and PayPal to stop processing donations for WikiLeaks after the organization and its founder, Julian Assange, released thousands of secret State Department cables and documents that were largely focused on U.S. international policies. By starving WikiLeaks of access to donations, the organization suffered financially, notwithstanding whatever other problems it might have encountered as a result of the rape and sexual molestation charges that Assange faces in Sweden. As far as we know, Assange is still in the Ecuadorian embassy in London and asking for political asylum to resist extradition to Sweden.

Joining Ellsberg on the board of the Freedom of the Press Foundation are, among others, John Perry Barlow, a co-founder of the Electronic Frontier Foundation, Xeni Jardin from the website Boing Boing, and actor John Cusack. WikiLeaks will not be the only beneficiary of the Freedom of the Press Foundation’s new website for donations. Others to benefit will include MuckRock News, which helps people make FOIA requests; The Uptake, a citizen journalism site generating online video news; and the National Security Archive, which collects declassified government documents. But the news here is WikiLeaks, which has had 95 percent of its intended donations blocked, according to Ellsberg.

In 2011, WikiLeaks ceased publication of documents due to what it described as a banking blockade. In a manner of speaking, the Foundation will be crowdsourcing donations for WikiLeaks toward restoring WikiLeaks publishing in 2013. The foundation’s website says that it will be accepting donations for WikiLeaks and the other three organizations through January 31, 2012, after which time the foundation could presumably continue solicitations for these groups or replace them with others. The Freedom of the Press Foundation will take eight percent of the donations as an administrative fee.

Regardless of what readers think of Assange, there is a question of the role WikiLeaks does or does not play in investigative journalism. The Freedom of the Press Foundation clearly puts WikiLeaks in the category of investigative journalism, grouping it with others that it sees as examples of “aggressive, public-interest journalism focused on exposing mismanagement, corruption, and law-breaking in government.” In the end, regardless of the specific merits of the WikiLeaks publication of State Department cables, the arrest of Bradley Manning as the alleged leaker, and Assange’s strange life in London dodging the Swedish extradition, the question remains as to whether WikiLeaks merits inclusion in the ranks of journalism. Do the calls from Congress to shut the place down represent a governmental assault on the ability of an investigative news operation to carry out its Fourth Estate functions in society? —Rick Cohen