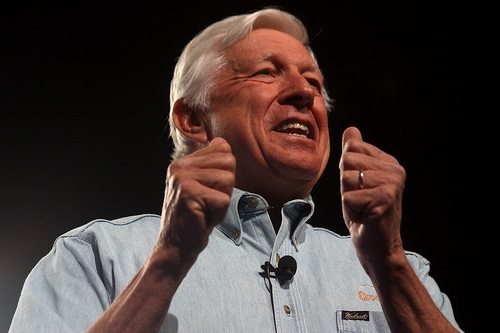 You may remember Foster Friess, who NPQ profiled as “Rick Santorum’s main PAC man,” from his 2012 campaign one-liner on contraception: “Back in my day they used Bayer aspirin for contraceptives; the gals put it between their knees and it wasn’t that costly.” Now Friess is back in the news for his curious remarks at a recent breakfast sponsored by the Christian Science Monitor, including his statement that women were “seduced” into believing that Republicans were waging a war on them.

“How the Democrats got away with this, I think, is another indication of a flaw of Republicans—no one confronted that and said this is bald-faced demagoguery,” Friess reportedly said. He also suggested that Republicans emulate this approach as an effective strategy. Friess saw other ways in which Republicans might do well to learn from Democrats, such as using more grassroots get-out-the-vote strategies. Friess said he was in “awe, absolute awe, of the Democrats’ ability to campaign and organize.”

Friess recounted his phone bank experience of “dialing up a fellow, I wasn’t quite sure I was going to pronounce his name right. And suddenly it dawns on me, ‘Who am I, a white guy from Wyoming, trying to convince this fellow to vote for Romney when Obama has had people in his neighborhood having dinners and barbecues and telling him [to vote for the president] for the last four years?”

Apparently without feeling much need for accountability, Friess went on to speculate that George Soros has been funding research in churches in an effort to force some to lose their tax-exempt status. He admitted that that the notion “may seem conspiratorial” and that, while he had read it somewhere on the Internet, he couldn’t say whether the information was reliable.

Ending on a positive note, Friess urged everyone to support President Barack Obama’s efforts to reinvigorate the nation’s economy: “The excitement that I see going forward now for our country is that all of us need to kind of help President Obama create his legacy. I’m sure he does not want to go down as the president [who] bankrupted America.”

While we ladies appreciate Mr. Friess looking out to ensure that we are not seduced by forces so much smarter that little old us, we can probably take it from here. The aspirin thing was very helpful, though. Keep that stuff up! –Ruth McCambridge