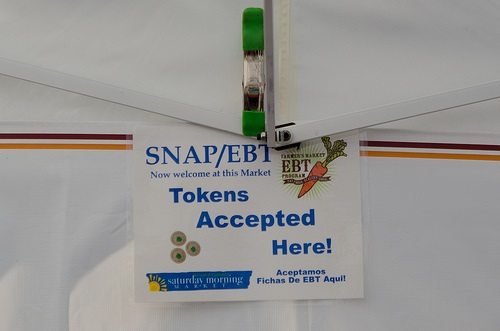 Eli Saslow’s Washington Post article on Woonsocket, R.I. is a stunning piece of social commentary. It examines the dynamic of the city’s “monthly financial windfall” of almost $2 million from the federal Supplemental Nutrition Assistance Program (SNAP)—otherwise known as food stamps—to poor people in this “nearly bankrupt town.” The food stamp money helps the Woonsocket community survive. Beyond being a mechanism for warding off malnutrition and starvation for desperately poor people, the food stamp program “that began as a last resort for a few million hungry people has grown into an economic lifeline for entire towns.”

Nearly 14,000 people get SNAP assistance in Woonsocket; that’s approximately one-third of Woonsocket’s population. In Rhode Island, SNAP enrollment has risen from 73,000 to almost 180,000 over the past six years. Payments through Electronic Benefit Transfer (EBT) cards are now the basis for many transactions at supermarkets and stores in the city. Storeowners call the first of the month “Uncle Sam Day.”

For SNAP recipients, the beginning of the month means a full EBT card, but by the end of the month, families run out of milk, then juice, meat, cereal, and eggs. The average monthly SNAP benefit, according to Saslow, lasts a family only 17 days. After that point, SNAP families often go to food pantries at local churches and other emergency food suppliers. According to the United States Department of Agriculture, the average monthly SNAP benefit in Rhode Island was $139.45 per person in Fiscal Year 2012. Despite our nation’s obesity epidemic, fueled by the relentless marketing of sugary and fatty snacks, there are thousands upon thousands of people who are hungry by the middle of each month and scraping together meals by the end of the month.

Much of the nation has never recovered from the pejorative images of food stamp users. That negative view was launched in large part by former President Ronald Reagan, who, during his 1976 presidential campaign, introduced the idea of “welfare queens” misusing food stamps and welfare payments. The Woonsocket story tells what nonprofits know all too well: there is widespread poverty and hunger in this country, enveloping whites, blacks, and Hispanics. The people described in Saslow’s article are a mix of America (Woonsocket is predominantly white), reflecting what is happening in this nation beneath the articles about record stock markets and an increasing number of jobs. One of the families profiled in this story is a couple with two kids, both of the young parents working at just about minimum wage jobs. They aren’t on welfare, but they’re poor enough to qualify for food stamps, poor enough to be part of the unfortunately large proportion of Americans who meet the definition of working poor.

Please read this article and remember what is happening in the cities and neighborhoods of urban and rural America. —Rick Cohen